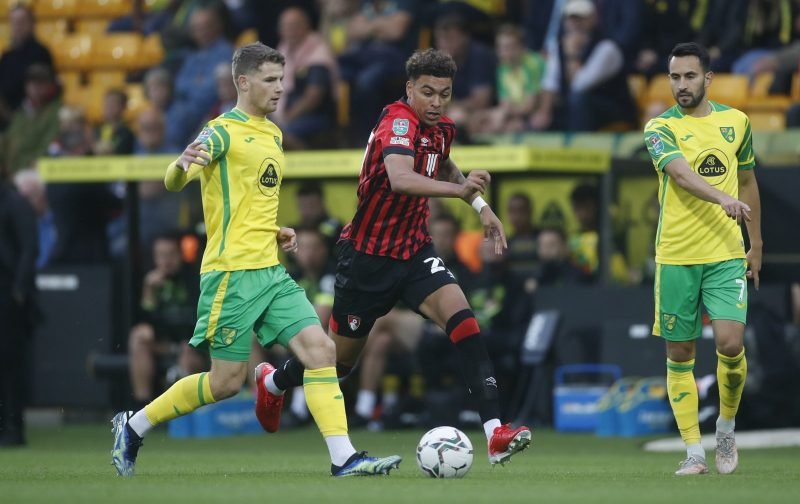 AFC Bournemouth and Premier League champions Manchester City have agreed on a season-long loan deal for exciting prospect Morgan Rogers, it has also been officially announced that the deal “could be made permanent with an option as part of the agreement.”

Sky Sports reporter Mark McAdam has posted on Twitter that the agreed fee is £9million.

I believe #afcb have negotiated an option to buy Morgan Rogers at the end of the loan which would be for £9 million.

Great coup for the club and Scott Parker.

Rogers came through the youth system at West Bromwich Albion, joining the club when he was nine years of age, he made his competitive debut for West Bromwich Albion Under 21’s in the EFL Trophy against Walsall in September 2017 and made his professional debut for the club in February 2019 in the FA Cup against Brighton & Hove Albion.

Within six months of that debut at first-team level, he was snapped up by Manchester City and the 2019/20 season saw him represent Manchester City Under 21’s in the EFL Trophy, scoring on his debut against Bradford City and making additional appearances against Bolton Wanderers, Shrewsbury Town and Scunthorpe United.

During the 2020/21 campaign, Rogers began the season with Manchester City, making another appearance in the EFL Trophy, this time against Tranmere Rovers, before making a half-season loan switch to League One side Lincoln City.

Rogers made 28 appearances in all competitions for Lincoln City, including a purple patch where he scored 6 third-tier goals in a 7 week period.

He ended his season at Wembley, losing the League One Play-Off Final to Blackpool.

“Morgan has all the attributes to become an outstanding player which Manchester City clearly recognised when they signed him.

“He had a good grounding in the academy at West Brom and enjoyed a fruitful loan spell with Lincoln City in League One last season, helping them reach the play-off final.

“We are absolutely delighted to have secured his services and he can only add to what is a young, talented and exciting squad of players – we very much look forward to working with him.”

Happy to join @afcbournemouth on loan for the season!!🍒Looking forward to playing for this amazing club!!😃🙌🏾 pic.twitter.com/rwjtjgRnle

🔺 First impressions
🔺 Getting stuck in
🔺 Ambitions for the season

Looks like an excellent interim replacement for Danjuma and great work by the club to secure the option to buy him if everything works out for both parties.

A big, strong, skillful lad who also likes to have a crack from distance, which personally I always like to see. We don’t HAVE TO pass the ball into the net every time! Definitely looks like he could make a great contribution to our season if we can keep him fit and playing regularly. – Join the conversation, click here.

One Reply to “Manchester City agree to future £9million deal”