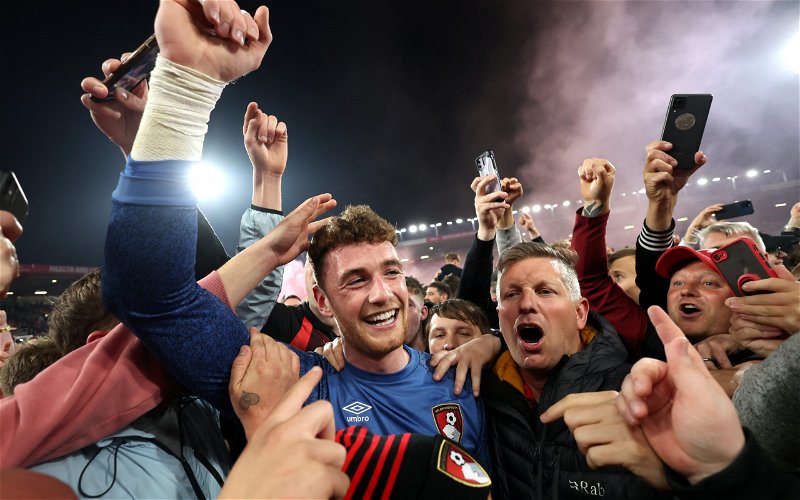 23-year-old Republic Of Ireland shot-stopper Mark Travers had a breakthrough season on the south coast during the 2021/22 Championship campaign.

Having previously made his debut in the Premier League against Tottenham Hotspur in May 2019, battling for a place alongside the likes of Aaron Ramsdale and Asmir Begovic, Travers got the nod last season under AFC Bournemouth head coach Scott Parker.

The initial plan had appeared to be for Travers to play back-up to loanee Freddie Woodman. Woodman had been set to join the Cherries in July 2021, but the move was delayed until January 2022. By that point, Travers had already established himself as the club’s first-choice goalkeeper and Woodman was unable to dislodge Travers during the second half of the Championship season.

By the end of the campaign, Travers had made 46 appearances in all competitions, had kept 21 clean sheets, including 20 in the Championship earning him the second tier of English football’s Golden glove award.

Travers has signed a new five-year deal with the club, contracting him to the club until the summer of 2027.

2021/22 was an incredible season for Mark Travers. Here's a look at five of his best performances ⛔️

Meanwhile, Gavin Kilkenny has extended his contract by “a further year” according to afcb.co.uk.

In May 2022 in an interview with the Irish Examiner, Kilkenny was quoted as saying that he had “two years left” on his contract, so his extension, would take his new deal through to the summer of 2025.

“We are delighted to secure Mark’s services on a long-term contract.

“Last season he was a key part of the club’s promotion to the Premier League and has continued his impressive growth and development.

“As a club, we’re pleased to provide a pathway for our academy players and Mark is a great example of not only the high standard of coaching across the club but of him having the mentality to take his opportunities when they’ve arisen.

“Hopefully Mark can continue to flourish and keep up his impressive progression in the Premier League.”

This is great news…for the time being at least. It just means that we’ll get more when someone inevitably comes in for him (Travers) as they doubtless will if he continues to improve the way he has done. – Join the conversation, click here.