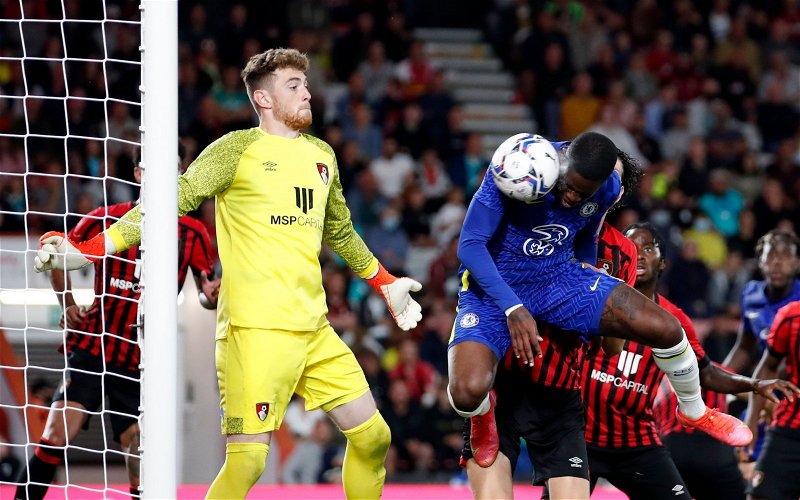 AFC Bournemouth goalkeeper Mark Travers almost took a clean sweep of awards during the presentation on the pitch ahead of the Cherries lifting a promotion trophy to celebrate promotion back to the Premier League.

During the 2020/21 campaign, Travers made just two appearances for the Cherries, both coming under former manager Jason Tindall, one in the league against Blackburn Rovers, the other in the EFL Cup against Manchester City. He would eventually go out on loan to Swindon Town in League One making 8 appearances.

A few short months later and AFC Bournemouth and Newcastle United reportedly agreed a loan deal to sign Freddie Woodman ahead of the 2021/22 season.

However, an injury to Martin Dubravka and Karl Darlow becoming ill with COVID-19 saw the deal collapse, as Woodman began the campaign as Newcastle United’s only available shotstopper.

This appeared to hand an opportunity to Travers, one that he showed he wasn’t willing to let go.

The 22-year-old would go on to make 46 appearances during the season, keeping 21 clean sheets in the process as the Cherries would go on to finish second in the Championship and win promotion to the top flight of English football.

What a season this guy has had 👏👏

“Mark has worked tirelessly and improved drastically this season. It’s a credit to him that he has won this award and I’m really pleased for him.”

He has been a remarkable keeper at times and excellent in the other times. Forgetting the ‘how did he do that’ saves for one minute to me, the most impressive thing has been the number of goals you would consider to be his fault.

There are always a few for any keeper and certainly, Artur Boruc, Aaron Ramsdale and Asmir Begovic who were also excellent made the normal share of rickets. I can only think of 1 or 2 occasions where I wondered if he could have done better. When you then add back in the spectacular saves you get to the very odd situation where the fans think a keeper is a bigger factor in a promotion season than the 30 goal striker they’ve not had since 1972. – Join the conversation, click here.