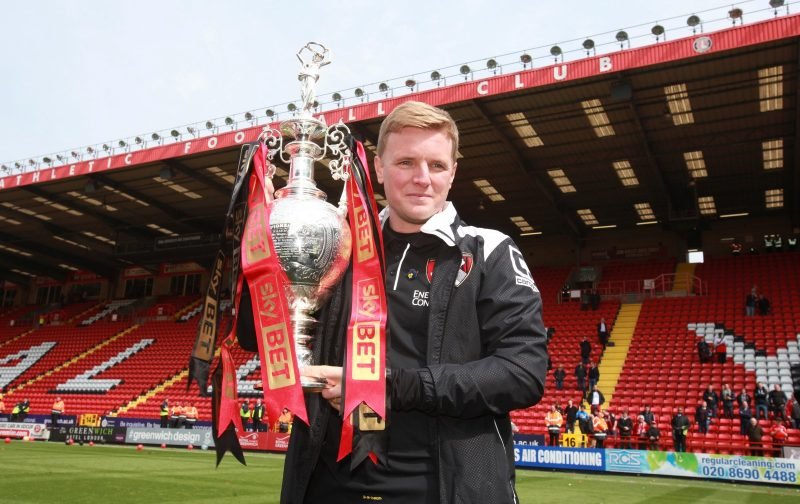 ‘The value of things is not the time they last, but the intensity with which they occur. That is why there are unforgettable moments and unique people’ Fernando Pessoa

Little Bournemouth’s stolen time at the top table ended today as we were sent, beleaguered and beaten back to the championship – ironically the league we had spent most of our 100 odd years fantasizing about being in.

What happens next will potentially define whether we slip back to the comfort zone of a bottom two leagues yo-yo club and financial implosion or whether we establish ourselves in an excellent second-tier or rise back for a second improbable stint with the big boys. The answer to that may lie with the fate of Eddie Howe who one assumes will be spending a few days pondering his future. The last two years have become progressively more painful for the maestro as his hard-working over-achieving loyal stalwarts evolved into a more mercenary, self-centred bunch with more talent but less desire, ultimately disconnected from the values and morals of the man who signed them.

If Eddie does return for next season then one hopes he remembers what made him successful – bravery and entertainment. The swashbuckling football of his early days, and indeed early Premier League days, was jettisoned two years ago for a safety-first approach that relied heavily on the form of forwards breaking at pace. When those forwards succumbed to injuries, poor form or unfaithfulness there was nothing left bar a team that struggled to get out of its own half and sometimes played whole games without a shot on target. Sad – as Eddie was the pioneer of realising that you have more chance of beating Liverpool 4-3 than you will ever have of beating them 1-0 Playing reserve teams in every cup and even resting your best players against the top sides were all part of a slip into that Stoke/West Brom territory that none of us wanted and along with VAR will make leaving this league less painful than had it happened a few years ago.

If Eddie doesn’t return then we have a potentially bigger problem. The whole off-field set-up is well documented as him and on the pitch, he is up there with Clough, Busby, Shankly and Revie as men that built an entire football dynasty. There won’t be many people who take a league club from obscurity to the top ten of the Premier league – indeed neither of the afore-mentioned legends did. It is not dramatic to predict that there are more chances of a poor next appointment than a strong one. Dynasties don’t tend to be followed by other dynasties unless they are Mings…… and I don’t mean that one.

Whatever happens, though we should never forget we were the chosen few. Generations of Bournemouth fans shuffled off the planet having answered the question ‘do you ever think you could play in the top league’ with a chuckle and a ‘not in my lifetime’. They were correct too. We also said it…….but we were wrong. We went to Stamford Bridge and won often, we beat Liverpool from a two-goal deficit and drew at Anfield, we beat United at home a few times, we beat Spurs in the last minute, we beat Arsenal (and more incredibly Jordan Ibe scored) and most importantly……….we beat Southampton at their place. These are the stories we will tell our grandchildren and they are statistically more likely to tell theirs than they are to see it themselves.

It is for that reason – whatever our individual criticisms of his last few years – that we are forever indebted to Eddie Howe for giving us the most magical of journeys. Whether he will stay to re-establish his legacy with a stadium and training ground is a little up in the air but his greatest gift is to a generation of Bournemouth fans and fans of small clubs up and down the country – the belief that anything is possible. We might be back with sparse crowds losing at home to Rochdale but we will have a smile inside and when people ask the next generation ‘ do you ever think you could play in the top league’ they will answer ‘yeah………of course’.

Whether Eddie stays or goes there is no better legacy than that.

Superb writing and insightful analysis as always. I always look forward to these reports and they always spark the kind of debate this forum is here for.

A strange season on every level and a strange relegation. As a Cherries fan for about 25 years (so probably somewhere in the middle on this forum), I genuinely never thought I would see us in the top league. It has bought some wonderful memories, from the first 4-3 away win at West Ham, to the many scalps of the big boys. Ake’s winner vs Liverpool, Daniels’ screamer, tearing Chelsea apart multiple times, 5-0 at Brighton, it’s been one hell of a ride.

And yet this season, even before Covid, has felt long, tired and turgid. The football has been at times almost unwatchable (that period of 4 or 5 games where we barely mustered a shot), former heroes have disappointed us, players seemed to tumble like dominoes at the worst times and we seemed on a slow sleepwalk to relegation since November, maybe even since last season. The West Ham away defeat was as low as I’ve felt in the PL 5 years, and there were 3 or 4 other games not much better than that.

Covid seemed to provide the team with a potential reprieve, with Brooks our expected saviour, but whatever we did in that break put us right on the back foot and light years behind even the likes of Palace and Newcastle in preparedness and fitness. We were so sluggish out of the blocks and ultimately that has relgated us.

Maybe it’s the lack of fans, or the wider perspective on life which this pandemic brings, but personally, my level of hurt from AFCB this season peaked in Jan/Feb and since ‘project restart’ I’ve been more relaxed about our fate. Today didn’t even feel THAT bad.

We have enough talent in this squad, even without Ake, Brooks, Callum, King and Jeff (although would be nice to keep 1 or 2 of them) to challenge at the right end of the Championship and I hope Eddie stays to rebuild it. But the guy is shattered – you can see it on his face and it has been the case most of this season. So he needs the right people around him to take the strain if he stays and he can’t continue to hold the entire club on his shoulders.

I’m excited for the Championship and more than anything for VAR-less football. I don’t think we were necessarily adversely impacted by VAR on balance over the season (except maybe the Burnley game), but for me it has ruined football as a spectacle, especially for those in the stadium. It’s too confusing, inconsistently applied and far too slow. If you can’t celebrate a goal wildly in the ground, what’s the point? I find myself checking myself even 30 seconds after a goal before allowing myself to celebrate. Sometimes penalties are checked about a minute after the incident and then brought back, surely that’s ruined the integrity of the match? Offside is now based on the size of a striker’s toe nail, and absolutely nobody knows the handball rule anymore. So yeah, I won’t miss VAR.

Anyway, thanks again for the reports all season Neil. I look forward to hopefully contributing a few more away-day reports next season! UTCIAD!