The reason why Begovic was dropped 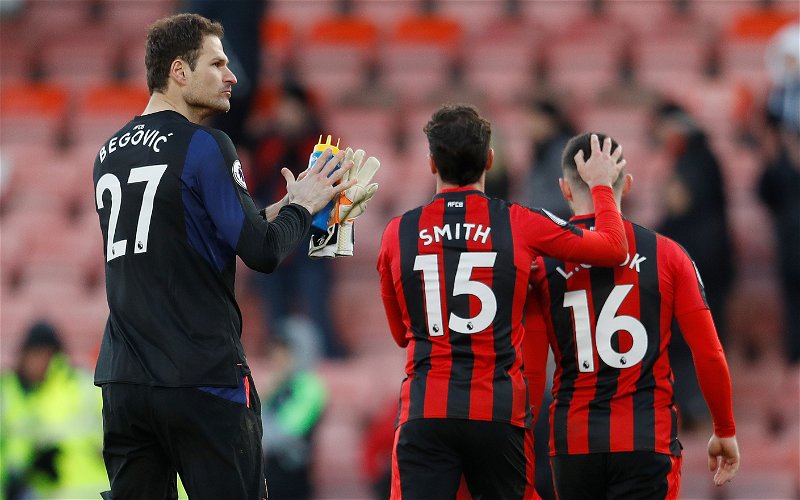 On Saturday there was one perhaps surprise change to the starting line-up, with Asmir Begovic being dropped in favour of Artur Boruc.

Boruc, who turns 39-years-old next month, had not featured in the Premier League since May 2017.

Last season he made just six appearances, four in the Football League Cup and two in the FA Cup.

This season again he had only seen action in the cup matches, most notably in the narrow defeat to Chelsea in the Football League Cup Quarter Final.

So why did AFC Bournemouth make the change with Boruc having such little game time in recent years?

“You tweak other positions in the team without really thinking about it at great length but the goalkeeper is always one which is analysed greatly.

“Asmir is the ultimate professional. He understood and very much supported Artur in his performance.”

The raw statistics might have also had an influence on Howe.

2 – Since the start of 2017-18, no Premier League goalkeepers have conceded more goals in the competition than Bournemouth's Asmir Begovic (101) and Everton's Jordan Pickford (89). Beaten. pic.twitter.com/xT8GdLJLWs

1.78 – Bournemouth conceded more goals per game (1.78) than any other side within the top four tiers of English league football in 2018. Cherry-pick. pic.twitter.com/z0Lvg5vKnf

Howe went on to add…

“I just felt Artur deserved to play, His form has been very good.

“He has trained excellently and in our game against Chelsea, in the Carabao Cup, he was outstanding and made a number of good saves.”

Boruc’s appearance against West Ham United was his 450th appearance of his career and the clean sheet helped the Cherries towards only their third victory in fifteen games.

I prefer Boruc purely because he seems to naturally fit our playstyle and is a better reaction keeper, and most of all he’s a lovable rogue.
Whilst Begovic is probably the better keeper for his saving ability and reach, just that he seems to take too long to play the ball. Quite honestly Begovic hasn’t shown recently that he’s above what Boruc can produce so I don’t see the problem with putting him in to give Begovic some perspective. That said, we seemed very settled against West Ham.

You always have a “aagh” yourself moment with Boruc, like when he drove the ball straight to their midfield with a miss kick. But in his defence, he closed down Andy Carroll, and on replay, he did enough to pressure an error. – Join the conversation, click here.