The Magpies Come South To Have A Peck At The Cherries 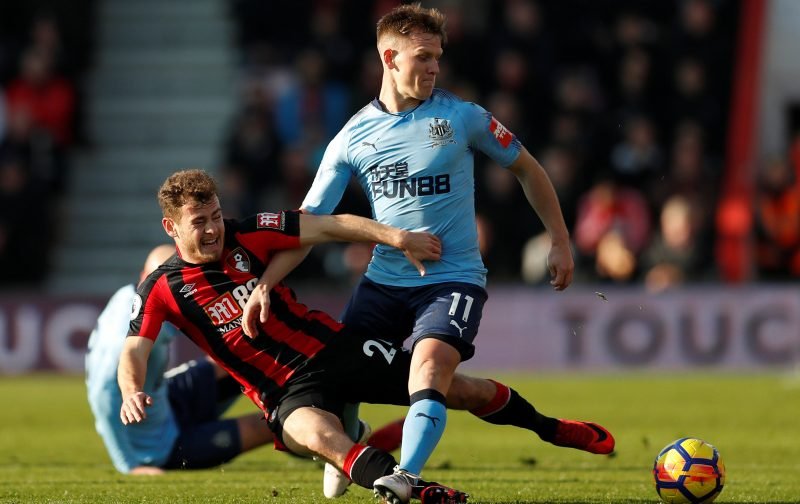 The Cherries ended their nine-game losing away sequence with a win at bottom club Huddersfield Town. Callum Wilson after his injury made a welcome comeback, this included a goal and an assist for Ryan Fraser to notch the second goal. Ryan had already assisted Callum for the first goal to get into double figures for assists with 10. Also making a useful contribution after the suspension was Jefferson Lerma in midfield. This win now gives AFCB 37 points, 3 points off the ‘magical’ 40 point mark for safety, which this season will be a lot less with 8 games to go. The next game will be back home at Dean Court against Newcastle United (the Magpies). This will be the last game before the International break.

In the January transfer window Newcastle manager Rafael Benitez finally got his man, with the signing of midfield player Miguel Almiron from MLS side Atlanta United for a club record fee of £21 million. They also signed Antonio Barreca a full-back on loan from Monaco until the end of the season, Newcastle also have an option to buy the player.

Since our game up in the North East at St James’ Park against Newcastle in November, the Magpies travelled to Turf Moor to play Burnley. Newcastle recorded their third win in a row beating the home side 1-2. This meant Newcastle United had won all three games in November.

They then had the busy month of December with seven matches. Their first game was at home against West Ham United, the winning sequence of the previous month came to an end, with the London club chalking up a 0-3 victory. The next game was over on Merseyside at Goodison Park against Everton, it finished 1-1. Back home again and the visitors were Wolves, the visitors won by the odd goal 1-2. Yorkshire was the next destination for the Magpies and Huddersfield Town, Newcastle United got back to winning ways with a 0-1 result. The Saturday before Christmas, Fulham were the visitors to the North East, result a 0-0 draw. Boxing Day and Newcastle and their fans were travelling over to Merseyside again, this time to face league leaders Liverpool, it ended as expected with a home win by 4-0. The next game was also away and it was further South to face Watford in the last game of the month and the year, it ended honours even 1-1.

January 2019 and the first game for Newcastle United was at home against Manchester United who were under new temporary manager Ole Gunnar Solskjaer, he had won all three of his previous league games, including the 4-1 win at Old Trafford against the Cherries. Solskjaer’s side won 0-2. This was followed with the Magpies travelling down to London and Stamford Bridge to face Chelsea, it finished with the second defeat in a row for the Geordies, 2-1. Things improved for Newcastle in their next two games which were both back home. Firstly beating lowly Cardiff City 3-0. Then it was up the other end of the table, where second-placed Manchester City were the visitors, the Magpies won 2-1.

February’s first two games were away, first against a top-six side and a visit to Wembley Stadium, to play Spurs. The home side winning 1-0. Then it was to the Black Country to the Molineux Stadium to play Wolves, it finished 1-1. The next two games were back at home and both ended in 2-0 victories against Huddersfield Town and then Burnley.

March’s first game was down to the London Stadium to face West Ham, it finished in a 2-0 victory for the London club. The next game was back home against Everton, after being 0-2 down at half-time, Newcastle hit back with 3 goals in a 19-minute spell, with two of them coming in the 81st and 84th minute from Perez. Newcastle are in 13th place in the table with 34 points and 3 points and one place behind AFCB but with a better GD.

The last time we played Newcastle United at Dean Court was just over a year ago. Dwight Gayle scored a brace before half-time and the score at the interval was 0-2, a half to forget for AFCB. With time running out in the second half it looked like the Magpies were going to take all 3 points, but in the 80th minute Adam Smith pulled one back for the Cherries and Dan Gosling scored the equaliser in the 89th minute, there were no more goals. So far at Dean Court in the Premier League, we have not beaten them. In all our home league games against Newcastle United, the Cherries have W1, D1, L1. In all competitions, the Cherries have W4, D3, L4.

AFCB Team News
On the injury front. Adam Smith with a hamstring injury, Steve Cook groin injury and Junior Stanislas with a hip flexor strain. Hopefully, David Brooks will be back after going off against Huddersfield with what has been reported being very fatigued with lack of fitness training.

AFCB Player To Watch
Callum Wilson came back in the game at Huddersfield and scored the first from an assist from Ryan Fraser. Wilson then became the provider for Fraser to score the second. Another good partnership.
Wilson has scored 11 goals with 6 assists and Fraser 6 goals and 10 assists, only Eden Hazard has more with 11 assists. Could be an interesting battle in midfield between Jefferson Lerma and Jonjo Selvey.

Newcastle Player To Watch
In their recent game against Everton, Salomón Rondon and Ayoze Perez had a good partnership for Newcastle U in their victory. Rondon scored the first and was assisted by Perez, Rondon then made the assist for Perez to score the winner. Rondon scored both goals against us earlier in the season at St James’ Park. Rondon has scored 8 goals and 5 assists, with Perez on 6 goals and 2 assists. Last season at Dean Court Jonjo Shelvey had a good game in midfield, he has only recently returned after being out with an injury.

Is what I imagine the team will be. Bit worried about the partnership/movement of Rondon and Perez, especially with Almiron now feeding them and Shelvey back from injury; Mepham’s positioning is probably the only thing that has been at fault in his performances so far. Hopefully, he can iron it out a bit and not go wandering as he did vs Arsenal.

With the home advantage and a weakened Newcastle defence, I would hope we can win this game- but it has been quite a difficult one in recent years. We should make sure to get the first goal so that they can’t shut up shop for the afternoon. – Join the conversation, click here.