Not so Merry for the Saints at St Mary’s 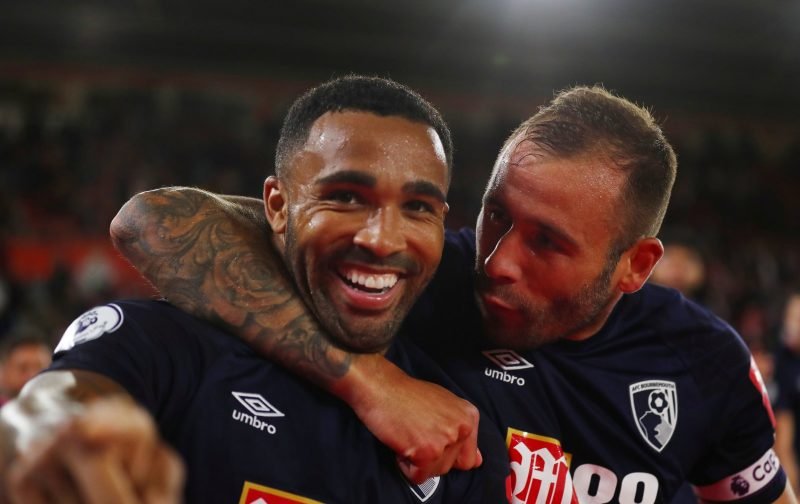 Southampton had never lost to Bournemouth at home in the Premier League before, but an impressive first half and diabolical defending by the Saints allowed the Cherries to snatch 3 points from the St. Mary’s, but not all was merry as complacency took over as the Cherries hang on to the lead in the second half.

Eddie opted against some suggestions of a 4-3-3 by sticking to his usual 4-4-2, with the only change being Jefferson Lerma in for Lewis Cook, who had a notably good game after his return from a long term injury. He also decided to keep super-sub Fraser on the bench.

Vocal support for the Kings of the South-Coast was high from those who had made the short trip to Southampton as the game kicked off and this was maintained throughout the first half until half time as it was deafened by boos by the home support. The commentators had mentioned the height advantage Southampton had over Bournemouth, but it only took ten minutes for this to be proven as Southampton’s towering centre-backs were not able to deal with NATHAN AKE’s 5ft 11in frame as he powered home a header from a corner, with Diego Rico grabbing another assist.
Southampton were determined to find a leveller but the defensive skills and bravery of the ever-present Cook and Ake partnership put Southampton’s chances of pulling one back next to nothing. The Cherries were literally centimetres away from grabbing a second 25 minutes in, with another counter-attack culminating in King having his goal correctly disallowed for offside.

But Bournemouth only had to wait another ten minutes for a deserved second goal to come, with Billing starting a move in midfield with Rico, and the former drilled a beautiful ball in from the left for HARRY WILSON to slot into the bottom right-hand corner; Bournemouth’s second, and Southampton’s defence ripped to shreds once again. Perhaps jealous of what had just occurred, Southampton attempted to replicate the goal that they had conceded but to no avail; as Hojbjerg’s shot was smartly saved by Ramsdale.

Southampton gained a stroke of luck with Big Cook clumsily giving away a penalty, and JAMES WARD-PROWSE halved the deficit by sending Ramsdale the wrong way. And once again the debate for the implementation of VAR was thrown into dispute as Cedric deliberately tripped King in the box and after a lengthy check by VAR the penalty claim was turned down despite clear contact by Cedric and King, and Cedric not touching the ball. To note, the referee on VAR was Graham Scott, who our fans may remember as the referee who denied a blatant penalty on Callum Wilson when he was hauled back by Luke Shaw of Man Utd a few years ago.

Southampton began to up the tempo as they searched for a leveller but were denied chance after chance by the impressive goalkeeping of Ramsdale and Steve Cook there to block any shots or through balls in the Bournemouth box. Eddie threw on Fraser for goalscorer Wilson to bring in some energy and Lewis Cook for solidity in midfield, something that Southampton lacked defensively. After Andrew Surman came on for Josh King, the nerves were relieved as a defensive mix up with Southampton’s goalkeeper and defender resulted in CALLUM WILSON grabbing an easy goal after a somewhat quiet night on the pitch.

Jack Stacey 5: Nervy with the ball due to his Premier League inexperience (and hence exploited by the opposition) but a good block to deny a seemingly certain goal.

Steve Cook 9: Rock in defence. Block after block cleared the ball at every opportunity. Great captain’s contribution. Would be a 10 if it weren’t for the penalty.

Diego Rico 7: Impressive first half by dancing past players pressing him but ultimately faded in the second.

Harry Wilson 6: Good positioning for his goal, certainly better than last weekend. (Fraser 4: Quiet and next to no involvement)

Josh King 7: Danced past defenders with determination and pace but seemed quite selfish. Close to grabbing a deserved goal, however.

Dominic Solanke 3: Oh dear. Goal drought continues. Could have had an assist through a simple pass but largely ineffective again.

Callum Wilson 5: Very quiet but goal somewhat redeemed himself. Did press quite well first half, however.

MOTM: Big Cook. A Cook-like performance and a saviour to a team that essentially dwindled in the second half. Maintained the determination and concentration he had in the first half and transferred it to the second. Ake and Ramsdale not far behind

Phew! A bipolar performance. A team dripping in determination and desire in the first half and a team dripping in nervousness and frustration in the second half. Southampton improved in the second half – no doubt – but we attempted to play at the same pace as the first half. Southampton won the ball high up the pitch and this was due to complacency; the players held on to the ball attempting to move out of trouble by playing it out rather than making a simple pass. This was evident in the set up for the second goal and the change in attitude in the second half. Notably, Solanke gave the ball away so many times, he seems to have no motivation to play. He still hasn’t scored which is disappointing. He needs to improve in the future, and I feel his position as a striker could be threatened when Danjuma and Brooks return from injury.

VAR will be the topic for debate. Both penalties, in my opinion, should have been given. The only downside to Cook’s magnificent display was his clumsy tackle, which can be viewed as a harsh decision. Hence, if a borderline decision such as Cook’s tackle means a penalty, the barge on King should have produced a penalty too.

In all, I’m glad that we finally grabbed a win over the Stains at the St Mary’s, a fluid counter-attacking display in the first half created what was to be an embarrassing second half, with defeat avoided due to the awful defending Southampton produced and the luck Bournemouth had with Cook, Ramsdale and Ake only continuing to impress in the second half.

Not sure anyone was worth 3 in a game as epic as that though. More a 5 as I agree that along with Stacey he looked a level off the rest.

Rico was Jordi Alba first half and Jessica Alba second half. Strange game for him. Another great assist though.

What a result though, think we ran out of steam second half and needed Cook earlier but we got there and that moment when Wilson was running towards the empty net was magical.

Cook and Ake joint Moms today for me. They were immense and having to cover two rookie full-backs too. The fact we have got through with six points using full backs learning the game is great.

The only real worry is Solanke who doesn’t offer us any cover for our forwards if they get injured and we need Danjuma back soon.