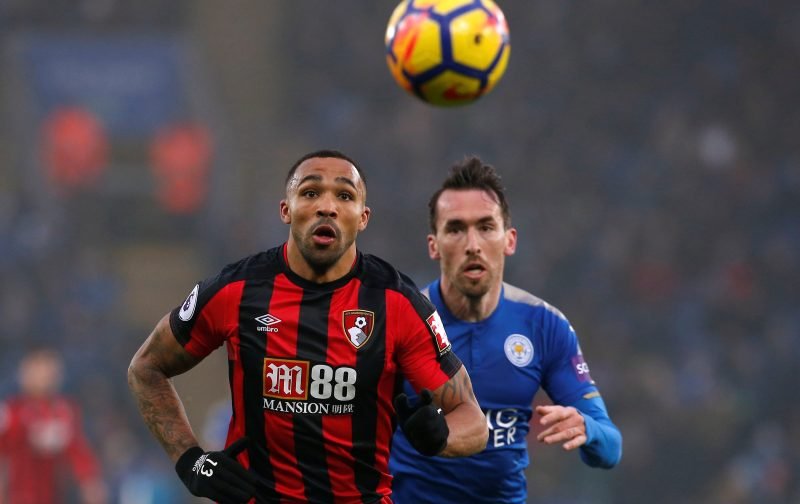 Bournemouth, so often the plunderer of late goals last season, were hoisted by their own petard when a 91st min smash and grab from Rash denied them a deserved point at a blustery Dean Court this afternoon.

The archetypal game of two halfs had unfolded beforehand with Bournemouth’s glorious first half matched by United direct second half. As Bournemouth understand only too well though…the second half is the best half to find form as the task is better understood.

Eddie made a change with a flat back four returning and Daniels dropping to the bench to allow in Stan. Brooks moved behind Wilson in the ten role. His team couldn’t have got off to a more explosive start gunning at Utd from the off with power pace and overloads in every position. Fraser was the first in…put clean through but always looking uncomfortable on his left foot and De Gea saved too easily. The returning Stanislas then shot wide from another great opportunity.

Bournemouth fans were wrestling with the enduring image of their team keeping United in their own penalty area when the afternoon got even better. From a cleared corner Cook’s majestic through-ball released Stan to cross low and hard for WILSON to thump home a glorious opener.

The red wave continued with Brooks heading wide and Smith’s long-range pass almost creeping in..it was inches away from haunting De Gea on bloopers videos forever. Stan was up next curling a drive too close to De Gea before Brooks looked to be flattened when about to head the ball but ref Tierney was having none of it and waved play on.

This decision, right or wrong, flattened the rest of the half. Perhaps not surprisingly Bournemouth ran out of steam after that 25 min blitzkrieg and gradually U tied inched their way into the match. As is often the puzzling way for Bournemouth, their opposition scored with their first serious chance. Young and Sánchez combined in the right and MARTIAL kept up his recent run of form with a calm finish when he arrived late.

The second half was a different ball game. Despite much maligning you don’t have the career Mourinho has had without spotting necessary changes. Effectively he bypassed our team by going long..brought Rashford on to create a rapid front two with Martial and brought Herrera on to sit deep and allow Pogba to move forwards. This stretched Bournemouth and allowed United to win the ball back higher up and create space behind our defence.

We didn’t have an answer to it other than to swap Gosling for Cook. A better option to me would have been to go 3-4-3 and pull the wingbacks back when defending as Franno was exposed by Martial and Pogba a few times in an obvious half time planned tactic. Our wide players looked shattered and our inability to get out hurt immensely. First Shaw broke into the box and Begovic saved brilliantly, then the big Bosnian had to act lively to keep out Sánchez header.

The only respite saw Fraser create havoc with a trademark run along the byline but Brooks effort was well saved by De Gea.

Bournemouth had their backs to the wall but were defending with great character, the best example of this being a miraculous double goal-line clearance from Ake and Brooks after Young’s free-kick had rebounded from the bar. Herrera then shot fractionally wide as the pressure grew.

Ibe arrived and did a few trademark runs and was involved in his teams best second half interchange of passes before Brooks shot straight at De Gea again. Goslings first touch deserted him when he broke into the box into another fine move.

The half finished with Bournemouth hanging on though…and eventually, they succumbed. It looked like a routine cross but Ake and Cook had got sucked into the middle and a far post header broke down into a goalmouth scramble for RASHFORD to toepoke a late winner and break Bournemouth’s hearts.

Begovic 7. Some excellent saves and no fault with goals.

Smith 8. Barnstorming runs, clever interplay and solid defence.
Cook 7. Solid and uncompromising his excellent season continues
Ake 9. How long will he be here…a cut above anything on the park again.
Francis 7. Good on the ball…spun by Martial a bit.

Stanislas 6. A quiet game back but showed quality with a cross for the goal.
Cook 6. A little profligate and faded but some great first half moments.
Lerma 7. Showed he can hold it among the best company strength wise.
Fraser 7. Outstanding first half but faded.

Mom.. Ake was everything we know him to be. Immense. Smith wasn’t far behind in my book.

Verdict
If you are going to beat the top teams (when they are on form) you are going to need 1) a strong performance yourself 2) take your chances when on top 3) a ref that refs the game, not the names. Ultimately we only had the first of these things go our way today.

We can take great comfort though from the manner of the defeat and the style and verve of the first half which will have been enjoyed all around the world. We should have taken two or three chances though and I think we missed King in that respect. Fraser and Brooks can sometimes lack the ice in their veins, particularly when on their weaker foot which both often are playing as reverse wingers.

The interchanges though are getting better as the season goes on and some of the football resembled Arsenal in their better days.

That said no game is won at 45 mins and we had no answer to the shift to channel and long balls by Mourinho. This is no surprise…we are always better against tidy football than direct football. I think we could have swapped to last weeks formation but it’s a brave manager to change defensive shape at 1-1 so I understand why we didn’t.

I think our dynamic openings sap us in the second half. Fraser, Brooks and Stan tired visibly. Neither are unfit so it’s a by-product of the huge amount of early pressing we do. It needs addressing though as we have been dominated for the last twenty mins of three of the last four home games. Leicester were already 4-0 down when they took us apart to score twice with ten men, Southampton’s purple patch saw us bring on Gosling at 0-0 rather than press for the win and we all know Gabbiadini should have snatched the late winner Rashford did today.

That’s the bit that will be troubling Eddie (but not too much considering we are sixth!). Is it the backfire from the blistering opening twenty? is it individual player fitness…Brooks, Fraser and Cook are the main three always? Is it just the fact we are used to being behind and fighting back…not sat wondering whether to twist or bust? He doesn’t trust Mousset or Defoe to run the channels and get energy further up the field so our subs are becoming Surman and Gosling which invites pressure rather than dissipates it.

Anyway…it seems almost churlish to pick fault in the season we are currently loving…today we went toe to toe with world-class footballers and out footballed them. That’s as much as any fan base can dream of. Onwards to the toon, we go…13 points better off than when we played them in the same week last season….