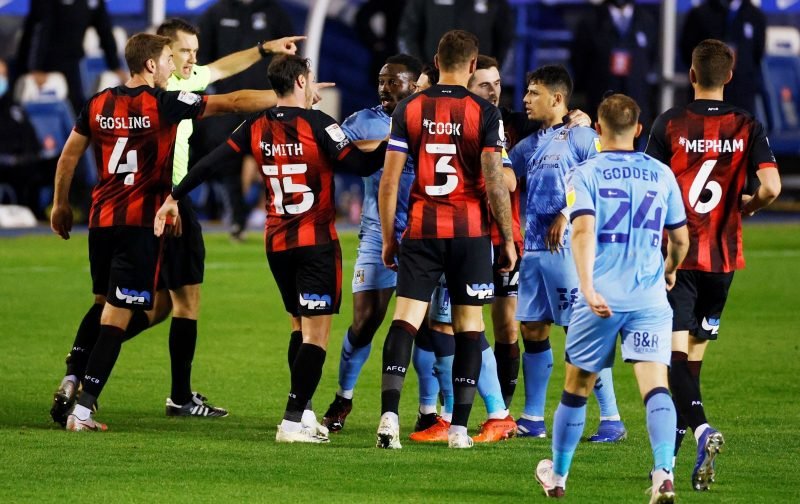 Welcome to a possible dress rehearsal for the play-off final. It’s between the two highest scorers in the Championship (with both teams averaging about 1.7 goals a game) although the form of the sides is noticeably different; over the last 7 games AFCB have picked up 21 points, scored 21 and let in 5, whereas the Bees have picked up only 9 points, scoring 10 and conceding 5. Momentum seems to be the buzz word and the momentum is truly with us. Woodgate has been keeping a reasonably settled side but will be forced into one change with Kelly being ruled out with an ankle injury. The current prognosis is only two weeks out which will be a relief to Cherries fans as he had firmly established himself in the left-back position. His replacement, Rico, is a different player, with less pace so unable to support Danjuma as much without leaving AFCB more vulnerable to the counter-attack, and it will be interesting to see if Brentford target the Spaniard as other teams have done. Brentford also have their full-backs missing, so Bournemouth could also exploit the wings given the abundance of talent in these areas (Danjuma, Brooks and Stanislas) and also have Da Silva out. I’ll be keeping an interesting eye on the tackles within this game. Neither side would be too upset if an opposition player had ‘accidentally’ been caught late ruling them out for the play-offs. We made four changes, Smith for Stacey and Stanislas for Brooks were like for like, Rico for Kelly and Wilshere for Pearson. It’s not clear whether Pearson is carrying an injury, but this seemed an odd change. Brentford lined up as a 3-5-2, meaning that the game would likely be won or lost in whether Danjuma and Brooks could exploit the gaps in the flanks or are forced to backtrack and defend.

From the kick-off, we were nearly in, with a heavy touch from Solanke meaning the chance disappeared. Cook thudded a clearance into Rico, but recovered to block Toney. It was a hectic opening, Pinnock was left unmarked at the back post from a free-kick and headed wide. Brentford had most of the ball but we looked dangerous on the break. It feels as though The Bees would create multiple minor chances, but we’d create a good one. That duly happened, Wilshere passing to Solanke who put Stanislas through on goal. When shooting he slipped though and struck the ball against his other foot. Given the hectic nature of the game, it wasn’t anticipated that this would be our only clear-cut opportunity. Five minutes later Rico was overloaded on the right and the cross was headed back for Canos to shoot, both Cook and Carter-Vickers had dropped back onto the line and the captain cleared the ball. The first lull in proceedings was at 15 minutes, and it was an enjoyable game with two teams wanting to attack. AFCB gained the ascendancy for a short period and after a good move between Billing and Stanislas, Junior decided not to shoot but pull it back to Danjuma. However, good defence from Brentford intercepted and cleared the ball. Jensen shot from 25 yards and produced a good save from Begovic as it looked like it was creeping into the bottom left corner. From the resulting corner, Brentford blocked Carter-Vickers well allowing Toney to be free, but the ball didn’t reach him. Jansson clatters both Solanke and Billing within two minutes and picked up a yellow card. At the half-hour mark, the shot count was AFCB 1 Brentford 8, despite this being an even game and not reflective of the dangerous positions we had manufactured but failed to get a shot away. Just after, a long through ball was misjudged by Cook, who probably expected a Brentford player to get a flick on it, and Toney was through one-on-one. Begovic stood tall, challenging the forward to beat him, and won the battle of nerves managing to sit on the shoot. Brentford racked up the shots whereas it just wasn’t clicking with Canos managing to nip in and take the ball before Solanke could shoot from near the penalty spot. Brentford were still on top, however, and Toney flashed one past the far post. Half-time came, with the Cherries pleased to be level, although I’ve never seen a shot count be so unreflective of the actual game, as we were playing ok apart from the last ball.

The second half began with a strange rugby-style up and under from Brentford. We crafted a corner early on before performing our trademarked policy of playing it short and badly allowing a dangerous counter-attack. In the 50th minute, there appeared to be a turning point. A long upfield ball by Cook saw Jansson on the wrong side of Danjuma, and resulted in him hampering his progress, probably helped by Arnie slowing down a little, leaving the ref with no option but to show the Brentford defender the red card. The Brentford substation saw the formation change to 4 at the back, but with 2 men left upfront, meaning we should have control of the midfield, although things were still not clicking in the final third. We made two substitutions on the hour mark with Stacey replacing Smith and Brooks coming on for Billing. The Welsh international went across to the right-wing with Stanislas playing in the No 10 role. I’d have wanted Pearson on for Wilshere, who hadn’t been able to influence the game much. Fortunately, the referee was alert to Toney trying to win a penalty by hooking his legs between Wilshere’s after the former England man had last possession. Brentford were having to sit back and defended well, with few chances for a 10-minute period, with the only incident being a bad foul by Forss on Rico, for which he was booked, and there was also a yellow card for Lerma who threw the ball at the back of Forss, presumably assuming the referee was looking elsewhere. Brentford were still getting forward though, a weak header from Cook back to Begovic gave Forss a half-chance but he blazed over. Then following a Carter-Vickers headed clearance Wilshere pulled out of a tackle with Marcondes, to avoid giving away a dangerous free-kick, and the Brentford man who had only come onto the pitch a minute early (with Mbeumo) shot wide. Woodgate tried to force things by taking off Wilshere for Surridge, but we went immediately behind when Toney had a shot blocked but was played through again with Stanislas ball-watching his shot was parried out by Begovic, but from the Cherries perspective agonisingly fell to Mbeumo instead of Carter-Vickers or Stacey and the ball was bumped in. Tempers were rising and there was a flashpoint between Toney and Rico, which precipitated Lerma being replaced by Pearson. We needed to increase the tempo but Brentford were defending well to repel the attacks. After the goal, there were few chances for either side and despite our numerical advantage, the game was fairly even. In summary, Brentford defended well and warrant credit for a deserved victory. It just didn’t come off for us when we were attacking. We need to hope that it was just a bad day in the office, and that should we meet Brentford in the play-offs there is a burning desire for revenge. 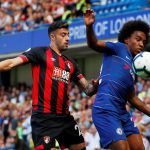 Begovic: 7. (MOTM). Did well throughout the game, particularly with the one-on-one with Toney

Rico: 6. Didn’t make many forward runs and was fairly quiet

Cook: 6. A goal-line clearance but two errors in allowing Toney in and also weak the weak back-pass

Carter-Vickers: 7. Didn’t do much wrong throughout the game

Lerma: 6. More subdued than normal, but didn’t have Pearson to help with the defensive duties. Received a needless yellow card

Wilshere: 6. I’m not sure he has the pace or legs to influence games as in the past, although not helped by the fact we were outnumbered in midfield for the first half. I suspect he may be limited to an impact sub after this game

Billing: 6. Unable to be as involved as in recent weeks. Hopefully, the early substitution and week’s rest will fix this.

Danjuma: 6. A very quiet game with Brentford often managing to double up against him although played a part in the Jansson send-off

Stanislas: 6. Unfortunate with the early chance, and was in space often in the first half. Went to sleep for the goal, although maybe expected that Cook would have picked up Toney’s run

Solanke: 6. It’s a tough job playing as a sole forward against three centre-halves. It became easier following the send-off, but he still didn’t pose much of a threat

Brooks: 6. Tried to assert himself on the game but the little tricks didn’t come off.

Surridge: 6. Didn’t have much of the ball at all

Pearson: 6. Only came on for the last 10 minutes, and was faced with a banked defence. Ticked things over well, but would have been more useful earlier in the game

1. Team selection was wrong in my opinion. Why change a winning side, apart from Kelly obviously
2. Why leave Danjuma AND Stanislas on the pitch for 90 minutes? They were both ineffectual for the whole game.
3. Why take Billing off when chasing the game?
4. We were lucky only to lose 1-0
5. Lincoln beat us before the play off, a few years back
6. Why play the stupid, passing around the back, in the last few minutes and not get the ball into the danger area?
7. Bego the only player who played well, therefore MOTM (although I would have given him 8)
8. I wish Solanke had better ball control skills
9. I wish we could take set pieces, especially corners
10. Brentford fully deserved the 3 points – Join the conversation, click here.