Begovic hoping to get out of Bournemouth soon 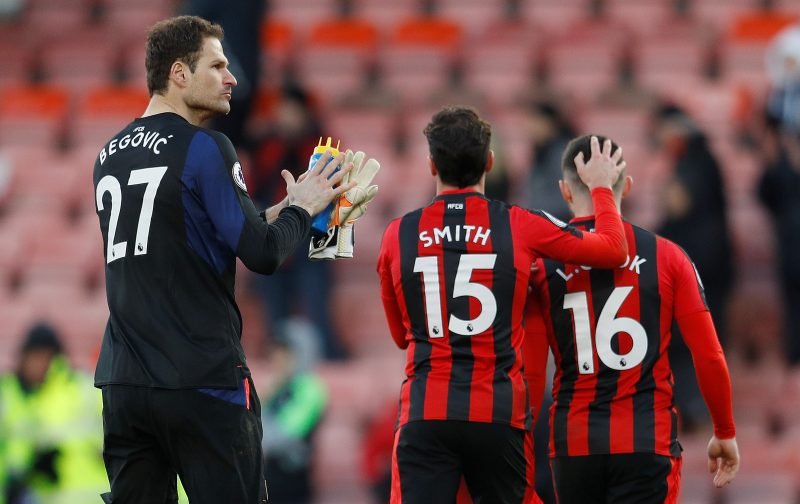 Whilst the English transfer window has closed, many European transfer windows are currently still open. Giving AFC Bournemouth goalkeeper Asmir Begovic a chance to get out of Dean Court.

Options could include Spain’s La Liga, France’s Ligue 1 and Italy’s Serie A.

The 32-year-old Bosnia international is currently fourth choice shot-stopper on the south coast behind youngsters Aaron Ramsdale and Mark Travers who between them have started the last five Premier League games across the end of the 2018/19 campaign and the start of the 2019/20 Premier League season and veteran Artur Boruc, who was rewarded with a new one-year contract at the end of last season.

Whilst Begovic still has three years remaining on his contract with the Cherries, his AFC Bournemouth career is all but over, his next step just needs to be found.

The reason for that was his dramatic loss of form during the 2018/19 season.

2 – Since the start of 2017-18, no Premier League goalkeepers have conceded more goals in the competition than Bournemouth's Asmir Begovic (101) and Everton's Jordan Pickford (89). Beaten. pic.twitter.com/xT8GdLJLWs

1.78 – Bournemouth conceded more goals per game (1.78) than any other side within the top four tiers of English league football in 2018. Cherry-pick. pic.twitter.com/z0Lvg5vKnf

In January he was finally dropped by Eddie Howe, who had stuck loyally to Begovic despite conceding 14 goals in just four matches.

Two months later he was handed an unexpected second chance from Howe, with Artur Boruc statistically the Premier League goalkeeper of the month, Begovic started the away fixture away to Leicester City and followed it up with the home game against Burnley.

That match looks likely to have proved his last with a disastrous performance littered with numerous personal howlers.

As quoted by the Daily Mail, Begovic told subscription-based website The Athletic…

‘He made a decision as the manager, Of course I didn’t like it. Any time you don’t play, you don’t like sitting on the bench.

‘We had a discussion, we had a conversation about it, and we moved on from there. And obviously now, the manager feels like going in a different direction is the best thing for the club, for the team.

‘I won’t take my kids to football. The atmosphere is vile. I don’t even like to go myself' – @asmir1https://t.co/4FQMX9V7Wr

‘First, you have to find the right option and the right option has to fit financially for the club. I’m still under contract for another three years, so it’s such a tricky situation to find a solution for everyone, so that’s why I haven’t gone anywhere.

‘I’m trying to find the right solution for everybody and hopefully in the next (few) days, until the end of the transfer window, we will find a solution for me to go and play games. I feel physically as fit as ever.’

Shedding a keeper wouldn’t make our squad any stronger, but I suppose it would be better economically for the long-term future of the team. – Join the conversation, click here.