We lined up with the somewhat surprise inclusion of Phil Billing in a midfield three, a positive to cling onto considering he was one of the better performers before the break. Could this spur the lads on and give us a chance? Well, kind of. We spent most of the first 20 minutes knocking the ball about fairly nicely without ever looking like doing anything to trouble the Wolves goal if we are being honest. The only incident of any note I can recall was when a nice little through ball by Junior Stanislas found Billing in space in the penalty area, unfortunately, the touch was heavy and as a result, Patricio was able to smother the ball out for a corner.

This set the tone for almost the entire first half really, we were able to work the ball into some half decent areas in wide positions but a mixture of the delivery being very poor and Callum Wilson being greatly outnumbered in a congested penalty area meant that this promising phase of the game proved ultimately fruitless. Still, we looked more solid so there were positives to cling onto. There was a clear game plan to double up on Traore and in the first half it was certainly effective, Junior deserves special praise for his work rate to get back into position and help negate his threat (I hope you were watching closely Harry Wilson) aside from one dazzling run where he made four of our players look like schoolboys and one relatively speculative shot at the end of the half we had kept their danger man pretty anonymous, I imagine Eddie Howe was satisfied going into the break.

The second half began with Wolves quick out of the blocks, a marked increase in intensity from them. They were now overloading the flanks and posing questions to our defenders, you felt that if we could withstand this period of the game then it would give us a chance of picking something up. Alas, it wasn’t to be, the ever-dangerous Traore picked the ball up on the right flank and drove to the bi-line, putting in a peach of a cross. Jimenez, despite being outnumbered three to one, was able to find a yard of space in the area and power home a header, giving Aaron Ramsdale no chance. 55 minutes of hard graft thrown out the window by a lapse in concentration we’ve become all too accustomed to seeing from our defenders.

From this point forward the game was a complete non-event unless you are Steve Cook or Nathan Ake, who enjoyed passing the ball between themselves while Wolves sat off and conserved energy for more challenging tests ahead. In truth, we never really came close to their penalty area aside from set-pieces, let alone to register a meaningful effort. The all too predictable slow build-up play with players seemingly unwilling to take any risks, coupled with the lack of a target man to hold the ball up at the top end of the pitch meant that the last third of the game made pretty depressing viewing. Aside from one ambitious effort from Danjuma from around twenty yards whistling a couple of yards wide of the post, there is not a lot to report. Wolves substitute Pedro Neto nearly rubbed salt in the wound by running half the length of the pitch but screwed his shot narrowly wide. And then the whistle went and another 90 had passed with us barely laying a glove on the opposition. 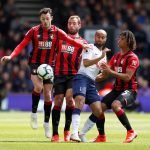 player ratings
Ramsdale- had nothing to do, and conceded a goal. 6
Smith- defended well, having a right-footer playing left-back negates our attacking threat in my opinion but that isn’t his fault. 7
Stacey- I like Stacey, I rate him highly. But today he was all over the place defensively I felt. Positionally caught out a few times and did nowhere near enough to put pressure on Jimenez for the goal. To his credit though his forward runs were one of our only attacking threats. 5
Cook- I will receive pellets for this but I think he’s been a liability this season, there was one player in the box for him to pick up for the Wolves goal and he failed to do so. On his day he can look like prime Maldini, when he’s not on it he looks like Shaun Maher. Unfortunately more often than not this year he hasn’t been on it. 5
Ake- pretty faultless as usual. 7
Stan- worked very hard defensively, offered nothing going forward. Quality poor. 6
Brooks- some nice touches but not in an area of the pitch that can hurt the opposition. He’s a good player but he’s not a Messi or even a Traore, he doesn’t have the ability to win games on his own. Would look quality in a good team that fed him the ball in dangerous areas. 6
Billing- thought he did ok, no more, no less. Gave us a presence. 6
L Cook- some neat touches, unfortunately, we need more than nice touches right now. He is not the creative type many have lauded him to be. He is essentially a younger Surman with the added ability to be able to carry the ball. 6
Lerma- put himself about. Not a lot more to say than that. 6
Wilson- difficult to rate as I believe the role he is being given in the team does not suit him whatsoever. He does not seem capable to hold the ball up and bring others into play, not at all suited to playing the lone forward role. Thrives on having a strike partner to playoff. Again, it isn’t his fault that we aren’t playing to his strengths. As ineffective as he’s been I still believe if he was played in a system that suited him with a Yann like strike partner, that he has it in him to score goals. 6

subs
Danjuma- looks like he can play football, puzzling that he doesn’t get a start.
Gosling- the last player you want on the pitch when crying out for creativity.
Solanke- touched the ball twice. They weren’t particularly good touches.

Eddie and Jason- I think by now that even the most rose-tinted among us would have to admit that EH and JT have gotten things badly badly wrong this season. You can analyse it in depth but to put it simplistically, I believe that the main issue is that we are trying to play a style of football that doesn’t suit the players that we have and asking players to fulfil roles in the team that don’t fit their attributes. I believe the talent is there but it just isn’t being utilised correctly. Someone on this message board summed it up quite nicely the other day, it kind of feels like you are watching Stoke or West Brom of years gone by, just without the goal threat and the ability of the defence to concentrate for 90 minutes. We rarely look like doing anything and it is very sad to see us going down without a wimpier. If we had a strong target man who could be a presence in the opposition box, and adopted a more direct approach while in possession then perhaps this more pragmatic defensively organised structure could be viable, but we don’t, so it isn’t. Thank you to anyone who has read the whole way through. I hope whatever the outcome this season that we will all be there next season still supporting the team! UTC

Oh and
H Wilson- is there any point in him being there unless you get a free kick in a dangerous position. Maybe I’m being harsh. Feel he could be effective played more centrally, maybe another not being utilised correctly.

Thanks for the report Waz, I always enjoy reading them.
I didn’t get to watch the match so it’s good to have a report. It seems we did far better than any of us could have imagined. Only the one goal. Maybe now Callum is banned we might actually get to see Surridge warm the bench! – Join the conversation, click here.