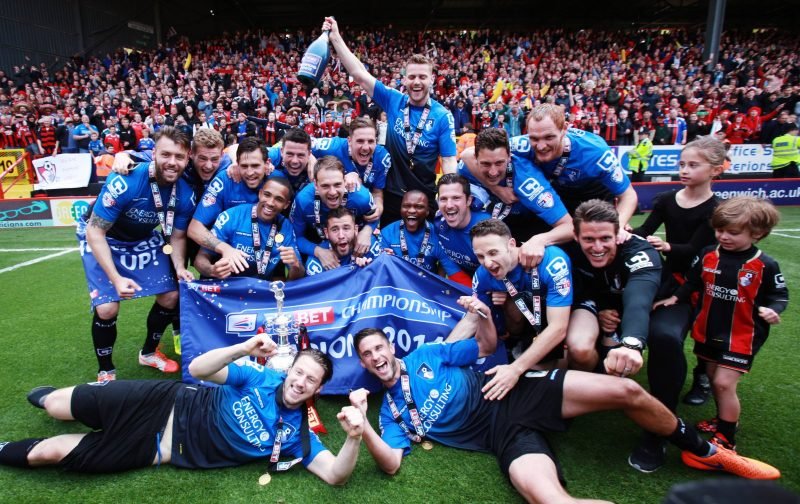 Or the Season Preview to you Brits.

‌‌Let’s face it, this is only our 11th season above the third tier of English football.

We are still batting above our average, so what is there to be sad about?
Put away the gloom of relegation, it’s another season playing many teams with a far bigger stature than ours, and great grounds to visit.
Oh, hang on!

I must admit to having taken my eyes off the ball outside the English Premier League.

A casual glance at results and the league tables, but not the in-depth
studying of form, goalscorers and the like.

I have contacted ex-Navy shipmates who support other Championship teams, and asked them for a 2 line preview of their team’s hopes and predicted finish.

So, remember, these views are not my own, but of genuine supporters of our rivals.

The thoughts on AFCB are my own, and as I am putting this together, I get more than 2 lines.

BARNSLEY: “We will struggle again. Not a lot in the pot to improve our chances”
Predicted finish 20th. Last season 21st.

BIRMINGHAM: “Dire finish to last season and nothing suggests we will start with a bang this season.”
14th at best. Last season 20th.

BRENTFORD: “I don’t think Toney will score as many as Watkins, but the team is playing it’s the best football in its history. We will be very close again. Once we can fill the stadium, we will be rocking. Exciting times here”
2nd. Last season 3rd.

BRISTOL CITY: “A couple of signings short of a strong challenge. A boss midfielder and another striker please.”
Play-Offs. Last season 12th.

CARDIFF: “3 signings so far, more promised. Difficult to call, but the squad is balancing out well.”
Play-Offs. Last season 5th.

DERBY: “Closing in on a couple of signings, but it’s all been a bit static close season.
Who knows? Hovered around the play offs again, expect similar.”
Play-Offs. Last season 10th.

HUDDERSFIELD: “Got rid of the Cowley’s and it improved. Much more expected.”
9th. Last season 18th.

LUTON: “The great escape.It will be similar this season.”
15th. Last season 19th.

MIDDLESBROUGH: “Warnock knows this league. Came in, played with a bit of passion,
so further progress is expected.”
Play-Offs. Last season. 17th.

MILLWALL: I have no Millwall supporting friends (who has?) My view.
“Strong finish last season and only conceded 51 goals, but only scored 57.
Find a striker, they might be near.
7th. Last season. 9th.

NORWICH: “If we spend some of that EPL money this time, we will romp it.
Or the relegation hangover could linger.”
2nd Last season. Relegated.

NOTTS FOREST: “If we improve at home, all will be good. Difficult to beat on
our travels. Grabban’s gonna get ya!”
Play-Offs. Last season. 7th

PRESTON: My view. “No new signings as yet, and with just Dan Johnson finding
the net regularly, they might not be so good this season.”
13th. Last season 9th

QPR: “Lost our main man, but some exciting new signings to freshen up the squad.
Good times ahead at last…perhaps.”
Play-Offs. Last season. 13th

READING: “I know so little about our new manager, it’s difficult to call.
Plus he took charge of his first training just this week.”
10th. Last season 14th.

ROTHERHAM: “We don’t have much cash to splash. We always find it tough
in the Championship.”
Anything above the bottom 3 will be great. Last season Promoted.

STOKE: “Picked up well at the end, and as the new season is just 6 weeks after the
last, high hopes for an improvement. Hands off Campbell.”
Play-Offs. Last season 15th.

SWANSEA: “Welcome back Cherries. It’s tough in here. We have a decent squad, who
will give another crack at it.”
2nd. Last season 6th.

WATFORD: “We will just sign a load of Udinese players and get back up the first time.
With just 3 manager changes this season, we can win it.”
Champions. Last season. Relegated.

WYCOMBE: “It’s was going to be brilliant visiting all those new grounds, but the shine has
been taken off somewhat. As a die-hard, I am full of hope of kicking a few buts. Just enough to
stay up mind.”
21st would be fine and dandy. Last season Promoted.

SHEFFIELD WEDNESDAY: “In theory, we can be off the bottom after 4 games. There is a steely
determination to shove it up the EFL. You did -17, this is a cinch.”
13th would have been play offs without the -12. Last season 16th.

AFC BOURNEMOUTH: “We all knew after relegation there would have to be cuts. It happens to all relegated sides from the top tier. We are significantly weaker at the time of writing, and waiting to hear of any newbies to bolster the dwindling squad.
I believe we have one crack at getting back, and should it fail, even fewer solidarity payments next season will result in even further cutbacks.
Who will score the goals? Well, Surridge has done the biz at this level, and like a non-pedigree race horse, Dom will appreciate the drop-in class.
We desperately need another in soonest.
Not convinced we have our No1 choice for a goalkeeper in as yet.
The defence is decent enough (one more in please), but continue to lose concentration far too often and we concede silly goals.
Billing and Lerma, and Lewis Cook should boss the midfield in this league, and Danjuma now fit will run rings around the tightest defence.

See, it’s not all doom and gloom.
I read somewhere that there are 18 ex EPL teams in this division. That shows you the measure of the task ahead. But overall, I do not believe it is a stronger division than 2014/15.

I predict 8th…However, drop that by 2 places for each of the following that are sold..
Brooks, Lerma, Rico, and any of the other book balancing sales.
I have excluded King, as it looks likely he will be gone.

Anyway, that’s it.
It’s not football as we know it, and most I have spoken to in this preview are having trouble trying to whip up any enthusiasm for this season.
We all want to get back into grounds asap, but that looks a fair way off. Maybe the entire season being behind closed doors, or maybe 20% capacity if things improve.
An interesting “faux” season ahead.
Good luck!

QPR in the playoffs – talk about rose tints, bottom half for them!

No fun tipping Wycombe and Rotherham for the drop – Seems Huddersfield are about to sell Karlan Grant to the baggies, new manager as well, I had a nibble at the 8/1 for relegation.

Personally, I can’t look past Norwich and Watford for the top 2 spots, parachute payments key this year when a lot of other clubs will just be looking to stay afloat.

Brentford I thought were going to lose 2/3 at least of their “BMW” strike force, think they have only lost W so far, if they lose another I’m predicting a season outside of the playoffs purely from a disruption angle.

Oh and thanks to Al for taking the time out to do the write-up. – Join the conversation, click here.