Is Brooks a number 10 or a winger? 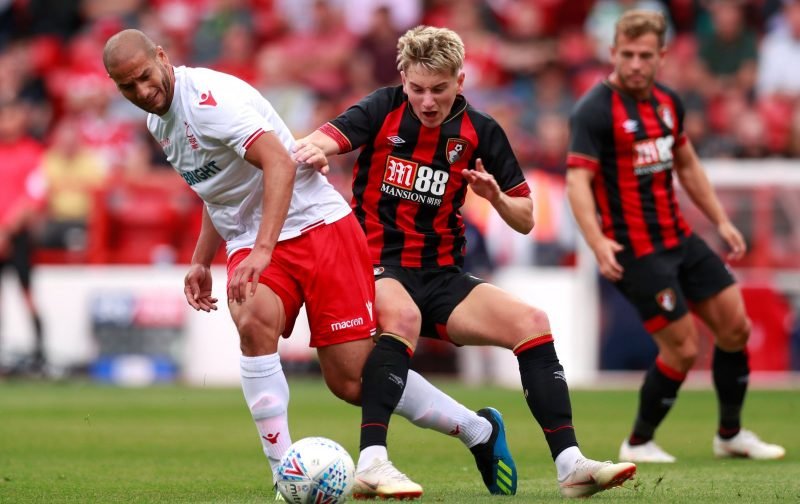 AFC Bournemouth signed David Brooks from Sheffield United for something in the region of £10million during the summer.

The 21-year-old made 30 appearances for Championship side Sheffield United during the 2017/18 campaign, but only 9 came as a starter.

He predominantly played a central, traditional number 10 role, linking the midfield with the attack.

But since his move to the south coast, AFC Bournemouth manager Eddie Howe has played him as a wide right midfielder, cutting inside to link play.

It’s a completely different role to one that he is used too, whilst also stepping up to the top flight of English football.

But Howe has been confident that the change of roles would suit Brooks, however, even he is surprised at how quickly he has adapted.

Against West Ham United last Saturday, Brooks created numerous chances for his teammates, whilst also had a fair few shots at goal himself. He perhaps maybe could have done better, but the fact he was making the chances this early in his Premier League career shows the potential of the player.

“…He’s still very young and new to the Premier League so he can be very satisfied with what he has delivered. He looked at home in the team.

“The only surprise for me would be how quickly he has adapted to the position because last season he played mostly as a number 10 for Sheffield United.

“We have changed his position. We have predominantly used him as a wide player and he has settled into that very well.

“His relationship with Adam Smith was very good from an attacking perspective and he defended very well, which isn’t always easy for young players in the Premier League, so full credit to him.”

As infuriatingly inconsistent as it may seem at the time, the fact Eddie Howe is prepared to not start Lewis Cook, Nathan Ake or Jefferson Lerma until they’re ‘ready’, while meanwhile throwing on the likes of Jordon Ibe and David Brooks straight into the team just goes to show Eddie is his own man and is more interested in honing the dynamics of the first eleven to win 3 points than he is worried about price tags looming over players heads.

Many other managers would feel under threat to justify their expensive outlays from the get go (hi Manuel).

I don’t think it’s just loyalty – Eddie obviously feels a freedom to try quick impacts in certain roles, but not for others. I’ll have a moan as much as the next person, but at the end of the day I’m so happy he’s the boss and not me! – Join the conversation, click here.