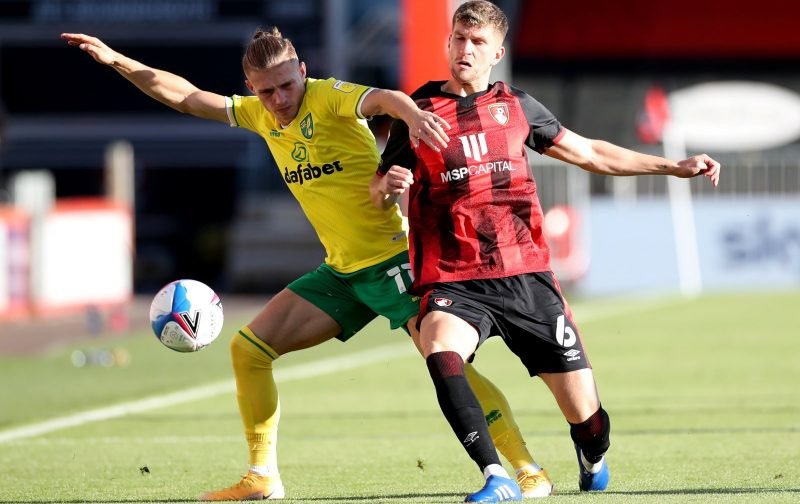 I felt good when I saw the lineup. Three up front felt like the right choice prematch so it was positive to see AFC Bournemouth manager Jason Tindall wasn’t afraid to go with it, even away from home against a decent team.

There was still the Adam Smith on the left issue which again caused some promising attacks to break down as he cut back to his favoured right foot. Equally, though, I have to acknowledge in the first half one cut back and shot drew a good save from the keeper and our best cross in the first 45 minutes came from AS’s left boot. Overall it still isn’t working for me and it’s starting to feel a little stubborn from JT.

I think there may have been some midfield rotation in play with Watford on Saturday in mind, I expect Lewis Cook to return for that one. No matter as Gosling had one of his much better games which was good to see and we didn’t look light in midfield with only the two given the effervescent energy of the personnel.

What’s interesting is a Cardiff fan posted on here before the match saying they’d let us dominate possession but be so solid at the back we couldn’t break them down whilst they’d be incisive on the counterattack. However, having watched the match I thought they were pretty poor in defence and we could and should have scored several more. They weren’t much cop at breakaways either, with their goal coming in the only period on the match when they decided to try and attack and exert pressure. Anything else that came their way, including the goal, in the end, was because of us giving the ball away through poor passing between or control from our players.

So with Cardiff happy to let us have the ball, or unable to get it back at times, it was up to us to unpick their defensive formation. And create we did, more so in the second half but all through the match, we looked dangerous with several gilt-edged chances going begging, both strikers guilty.

Playing out from the back was problematic at times. When they push that many that far forward in the press it should open up some space further up the pitch. A few dink balls into that space or a long one over the top into a channel for Danujma or Junior might have made them think twice about committing so many so far up the pitch. As it was, they knew there was little danger as we were so wedded to it or when we resorted to a long ball, it was often straight down the throat of the striker/central defender battle which made it easy to combat.

There needs to be some intelligence shown on the pitch in varying this even if it’s the main pre-match plan. It did happen a little in the second half but not nearly enough.

The feeling after the game was one of frustration, it was definitely two points given away on a platter with a pretty little bow attached rather than one point won. On the balance of play, the balance of good chances, the balance of openings that didn’t quite come off and pretty much any way you slice it we should have won that.

This sometimes happened with Howe in our promotion season but the team would come out in the next game and pick up where they left off trying to blow the opposition away. With JT’s more horses for courses approach, I don’t think we’ll see that, in which case we have to rue not taking the goals when they were on offer.

Arnaut Danjuma
Looked delighted to have a Junior as a creative partner in crime on the pitch. He was also releasing the ball which was great to see. Hilariously bad free-kick but a threat for most of the match. A nod too for Junior who was very unlucky not to score.

Jack Stacey
Sometimes it seems he’s afraid to try and take his man on in advanced positions as he more often turns back. However, play it through for him down the channel and he’s brilliant. Unlucky not to get a second assist in the match.

Jefferson Lerma
I asked to see him thread some balls through if he was going to play further forward and he absolutely nailed it perfectly for Stacey to help create the goal. Some others went astray but you forgive that when a player is trying to make things happen. Good to see.

Diego Rico
Immense, although I missed the first 5 minutes during which I gather he may have made a bad error. Seems to have gone from the forgotten man to the essential man in double-quick time.

Domonic Solanke
I’m desperately trying to look at the positives when I write these but the number of times he fell over in promising positions was disturbing. Someone get him some longer studs! I’ve commented before about how he seems to get these worldie saves or clearances go against him. I actually thought the save onto the bar wasn’t a great finish this time. Way to close to the keeper when he had nearly the whole goal to aim for. Also to miss the target with that header was really poor.

For a long time, I thought he was a confidence player and after a goal or two, he’d suddenly look better. Here we are finally but unfortunately, he still looks the same. Gets in good positions which is a valuable skill but is squandering them through a variety of means at an alarming rate. We aren’t France with Zidane and Djorkaeff, we can’t carry the Championship Guivarc’h. It’s on him now, he needs to sort it out.

Overall Grade: C+
Tactically mostly good, decent performances across the pitch but individual errors or lapses meant it was 1-1 and one point rather than 2-0 or 3-1 and three points.

At the moment I’ve seen a keeper do well for us. We’ve been mostly solid at the back. We can compete well in midfield most games. If we play them, we have creativity upfront. The one thing we haven’t seen is a clinical striker. Surridge and Solanke have both had chances to lay claim to the spot and unfortunately fluffed their lines. It may be unpalatable to some but King is a must-start on Saturday and he should be played in his coveted central role.

Two points were thrown away tonight.

Not only did Cardiff play the way their fan expected, given the nets full of tactical analysis that said same, but I am also sure JT knew that too. No surprise then our 2 man midfield worked tonight but don’t take that as a sign for every game. Technically they did weather our pressure and nicked a point with one short spell of pressure, so tactically they stayed in-game to earn their point.

Agree on Smith, he has ability but he can disrupt flow when on left, plus he is frankly embarrassing when he keeps going down, needs treatment and is always fine to carry on.

On the strikers, it’s too easy to judge. At this rate, Solanke gets 15 for the season. Sure he needs more, but worth persevering because he will have a spell when things go his way, plus wingers need to contribute more goals.

Personally disappointed by Danjuma, at times good, at others reminded me of Ibe, holding the ball for too long. Would drop him for King, and swap Brooks for Stanislas Vs Watford ( for fresh legs and preservation)

I would drop rating to C, not because of the result, performance or any disappointment but for not putting subs on earlier when we could have sustained our early second-half pressure. The opportunity was there to make an attacking change after 60 minutes, at worst 75, but we waited and made like for like swaps very late. However, if we beat Watford, then this result might just be worth a B with hindsight. – Join the conversation, click here.