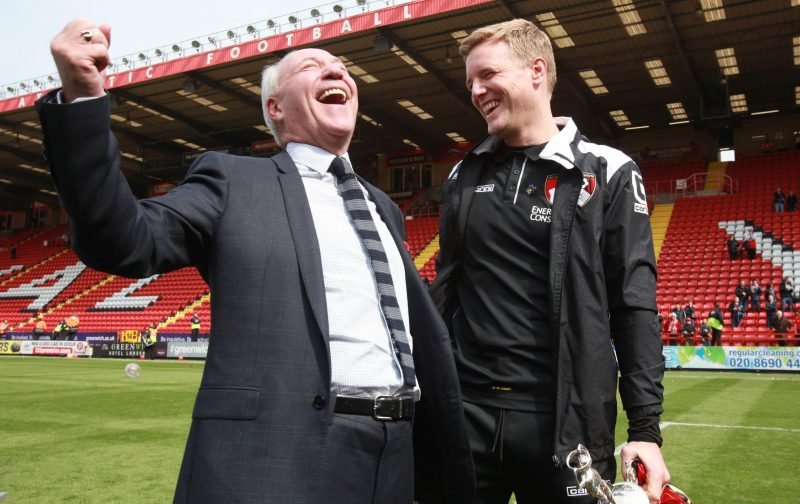 AFC Bournemouth travelled to Vicarage Road to face Watford, with both sides impressing in the top half of the Premier League table.

It is easy to forget that with both sides now in their fourth consecutive season in the top flight of English football and well established at that level, that it was only 3 years ago that the two sides were battling to win the Football League Championship.

On the final day of the season and heading into the 90th minute, the title was Watford’s only for a stoppage-time goal from Sheffield Wednesday to provide some late drama and hand the famous trophy to Eddie Howe’s side.

This fixture, however, did not enjoy as much late drama or indeed any real competitiveness.

Watford had a half decent chance at the back post from a header, but nothing really to trouble Asmir Begovic in the Cherries goal.

The home side decided to maintain a very high line against the visitors and were made to pay on the counter-attack.

Callum Wilson’s had his effort well saved, but David Brooks was on hand to sweep home the opener.

Good work from Joshua King led to a blatant penalty, although the Watford defender was perhaps unfortunate to receive a second yellow for that offence alone. The referee may well have thought that his first offence, smashing into Begovic almost being a red card offence was enough on a strange totting up process, but still maybe, slightly unfortunate.

King didn’t mind though as he slotted home the spot kick.

The third came from a world-class ball across from Callum Wilson for King to bag his brace.

Minutes into the second half and Ryan Fraser set up Wilson for the Cherries fourth of the afternoon.

Howe’s side then played out the final half an hour of the game in first gear to take a comfortable three points back to the south coast.

“It’s a great result for us and we’re delighted with that.

“I would say that we have played better than that, but we’re certainly very pleased with that result and our position off the back of it.

“Both centre halves were dominant and Jefferson Lerma did a good defensive job in front of them, I’m really pleased with their work.

“We were very good in both boxes today, which was a flip from our last away game at Burnley, it was an incisive, efficient performance and we dealt with the physical contest really well.

Absolutely buzzing after that!

Some dodgy moments early on, especially the free header, but we looked so lethal on the counter and it was done at 2-0. The rest of the match it was lovely to just laugh at Watford fans trooping out and crying about a couple of decisions going against them. We could/should have had more, overplayed it a few times.

King was immense even without the goals, he is so strong with his back to goal. Lerma really looks the part and is exactly what we’ve missed, that moment in the 2nd half when he won the ball despite being basically on the floor was outrageous. Ake once again was a rock, if Maguire is worth £75million, what is he worth??

Rubbish away facilities at Vicarage Road. Think there was one person selling beers for the entire away support section! Once again great away support and it drowned out the monotonous drum. – Join the conversation, click here.