Will winger snub Arsenal for Tottenham? 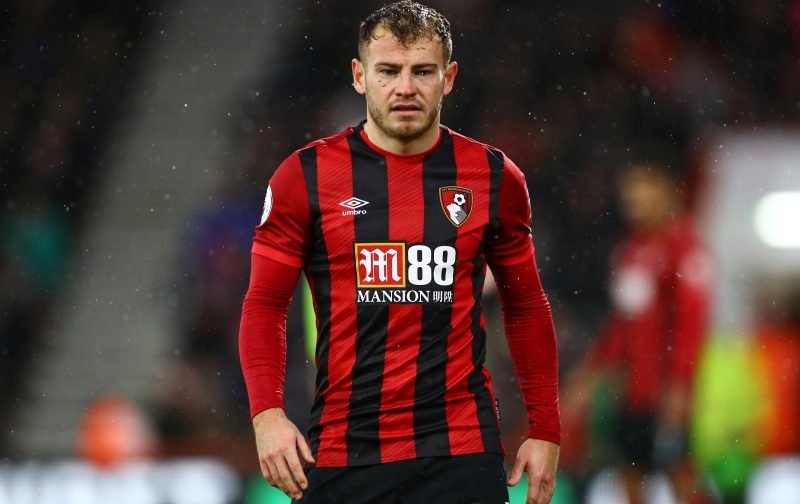 AFC Bournemouth and Scotland international winger Ryan Fraser is reportedly set to snub Arsenal in favour of a move to Tottenham Hotspur.

Fraser has been linked with a move to Arsenal for well over a year.

At that point in time, the Cherries were very keen to extend Ryan Fraser’s stay on the south coast, offering him a reported £100,000-a-week contract.

However, Fraser would fail to commit to a new deal and after setting various records with his partnership with Callum Wilson, he would enter into the summer of 2019 on the brink of leaving AFC Bournemouth.

The fall out between Ryan Fraser and AFC Bournemouth turned during the same with speculation linking Fraser with moves away, but the Cherries refused to sell and the situation turned bitter with a very public spat between Fraser and AFC Bournemouth chief executive Neill Blake, who felt he had been forced into releasing a statement regarding the situation as far back as June 2019.

The 2019/20 campaign kicked off with Fraser still with AFC Bournemouth, but he failed to come even close to his form of the previous campaign.

The latest in the saga came at the tail-end of January 2020 when Fraser confessed that for the opening four months of the season, he didn’t play for the team and wasn’t giving maximum effort for his employers.

His comments came in an interview with Kris Temple for BBC Radio Solent, which can be listened to via Twitter below.

“I didn’t play for the team”

The Bournemouth winger told @kristemple that he’s regained focus and will give everything until the end of the season 🔊👇 #afcb pic.twitter.com/LZEeACtQEN

Since that point, to Ryan Fraser’s credit, his performances did pick up slightly. But the damage between the player and a sizeable proportion of the fanbase had already been done and if anything, all it did was highlight how little effort he had been making during the first half of the campaign.

His apparent lack of professionalism could potentially also damage his reputation with any future club hierarchy and supporters, depending on how his comments are viewed away from the south coast.

If that does turn out to be Arsenal, then the following report will also not help his cause.

Football Insider have reported that Ryan Fraser is keen on a move to Arsenal’s arch-rivals Tottenham Hotspur.

“A source with knowledge of Fraser’s situation has told Football Insider the Scotland international is eager to join a Champions League calibre club and Spurs would interest him.

The report goes on to add that Tottenham could well make a move with a bit of a reshuffle amongst the squad in a bid to balance the books.

Tottenham Hotspur signed left-sided attacker Steven Bergwijn from PSV Eindhoven for £27million in January but they could sell Erik Lamela this summer to free up an attacking slot in Jose Mourinho’s squad for Fraser.

Fans don’t mind a good player who maintains his performance level who has been committed throughout his contract.

When they do that fans don’t begrudge them a move to a bigger club.

Take Ake for instance…..there wouldn’t be a single person I doubt who would begrudge him a move.

If you’re good enough, like Ake, you engineer a move through your consistent performance levels, it’s been the way in football with top quality players since day dot.

Refusing to sign a contract, wanting away and not putting effort in is not the way to go about it.

Hence why Ryans actions have annoyed quite a few supporters, and probably Eddie and Jason too. – Join the conversation, click here.