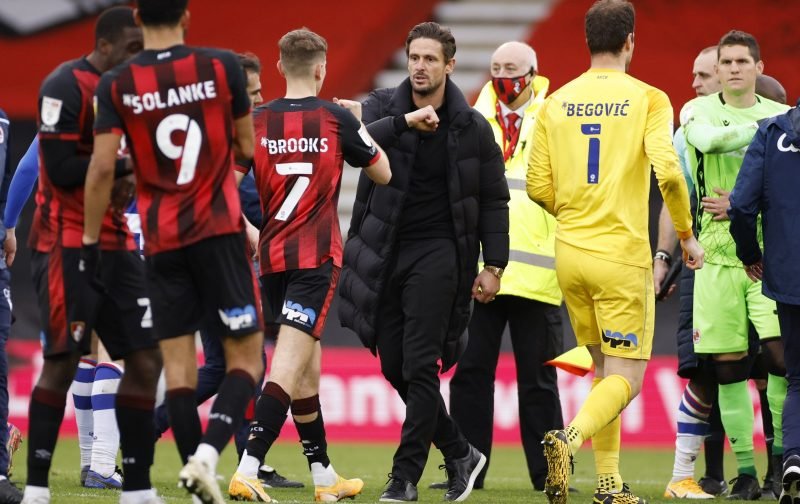 A football stadium without fans is like the Tin Man, lacking its real heart. So the big news of the day was the return of Bournemouth fans to a match for the first time since the defeat against Liverpool in March. The sound of Nonny’s voice ringing around the stadium was an early Christmas treat and the difference in atmosphere and the anticipation it created was wonderful to see and hear.

Jack Simpson also made his first league appearance for the Cherries since that fateful day at Anfield, in for the injured Mepham as Lerma came in for the suspended Rico with Tindall opting for three in the middle of the park with Kelly moving to left-back.

The opening exchanges were back and forth with little threat in either direction. The high press from Huddersfield seemed to be creating problems for several Cherries players with the ball lost a few times to the tactic early-doors.

After 7 minutes a strong Lerma challenge on the halfway line won him the ball with space opening up in front of him along with runs from Brooks and Solanke. Head up, he played it through to Brooks who dragged defenders around him as he closed in on the Huddersfield area and shaped to shoot only to them slip the ball to Solanke whose dart behind his distracted defender left him closing in on goal. His one touch and then glorious dink over the keeper to make it 1-0 was the sign of a striker in form and the mark of something we haven’t been able to label him since he came here – a goalscorer. Wonderful to see.

Four minutes later Brooks and Lewis Cook tried to play their way out of defence after the Cherries repelled a set-piece only to give it away. A quick pass from Huddersfield left Bacuna driving centrally at the AFCB area with space to unleash a shot. The strike took a wicked deflection off Simpson and seemed to be heading into the corner only for Begovic to fling himself with a hand stretched out a hand like a meat platter to force it away. Excellent keeping.

The value of that was apparent one minute later at the other end when Lerma pressed the Huddersfield defence and they passed short allowing him to intercept on the corner of their area. He fed the wide-open Solanke in the area who took one touch and then battered the ball into the far corner of the net.

It was two heavy blows but Huddersfield didn’t choose to close the hatch and try and slow the game down, instead of pushing forward and it nearly paid dividends when some neat passing sliced open the Cherries defence and ended with another save from Begovic.

Then on 20 minutes a fairly innocuous-looking cross in from Lerma was skilfully plucked out of the air by an outstretched Daddy Long-legs foot from Solanke. Surrounded by defenders, his second touch was to lay the ball back to Brooks who was loitering with intent at the edge of the box. The Championship’s November Player of the Month unleashed a curling drive with force that left the Huddersfield keeper rooted like a tree.

3-0 and the Terriers looked terrified of our attacking prowess. Meanwhile three times Solanke had taken two touches in the box resulting in two goals and one assist. Brooks was everywhere, popping up one side or the other and dragging players out of position with him as they tried to cover his threat.

Kelly and Smith were both getting forward on their respective flanks and, after a slightly nervous start, Kelly was growing into the game with some good defensive work as well as offensive.

The half broke down with neither side maintaining a period of sustained pressure but the Cherries still created the best remaining chances. An excellent Billing interception allowed him to play through Stanislas who, in turn, laid it on for Brooks only for him to side-foot wide when well placed. Then moments before the break a wide free-kick pinged in by Stanislas was flicked goalwards by Steve Cook only for the keeper to pull off a good save.

No doubt delighted with what he’d seen, Tindall kept things the same at half time whilst Huddersfield changed their keeper due to an injury picked up when making that late stop.

The visiting team came out of the traps when the whilst blew, no doubt having endured a half time rocket or two, and a shot after 45 seconds required Begovic to be alert but he was prepared and well-positioned to keep it out.

After that, it was a mostly quiet first fifteen of the second period. Then the Terriers exchanged smartly on the edge of the Cherries box leaving a striker through on goal but with the trigger about to be pulled, Kelly flew in to put in a majestic block and prevent the deficit from being reduced.

Multiple subs started to be made by both teams as the game started to resemble an amorphous blob. Sloppy play combining with smart intercepting being the starting point for most chances.

With a first senior career hat-trick in his sights, Solanke drilled a shot from outside the area just past the post. I wanted to make a point of this as since joining he’s picked up a reputation as a player that can’t strike the ball cleanly. It’s amazing what confidence can do as he absolutely belted this as clean as a whistle.

Then on 66 minutes Stanislas picked the ball up near the halfway line and started dribbling at the Huddersfield defence. Their tackling made it look like he was running at them with a live landmine at his feet but that doesn’t detract from the shimmies and pace at which he went straight at goal past four players and slotted home. Scintillating stuff to make it 4-0.

Three minutes later it was Solanke’s turn to run at the Huddersfield defence at pace who were starting to look as organised as a herd of cats. He passed to the wide open and recently subbed on Gosling who laid it perfectly to his fellow replacement Surridge to fire home for the Cherries fifth in what was turning into a rout.

This prompted Tindall to bring off Solanke for some much-needed rest, although he would no doubt have preferred to try and secure his hat-trick. In front of a capacity crowd, his departure would have received a prolonged standing ovation but it was great that even reduced numbers got to see this performance.

Since signing for the Cherries his struggles have been well documented but from the tail end of the PL season, he’s really grown as a player, even if those matches have been behind closed doors. He’s now done it in front of the first returned smatterings of the Dean Court faithful and bestrode the pitch like a mythical giant.

The remainder of the game could have seen more misery heaped on the visitors as several chances were spurned or saved. However, the main noteworthy moment came on 85 minutes when Zemura came on for his league debut along with the previously unheard of 16-year-old Ajani Burchall who is the third-youngest player to ever make his bow for the club.

It’s hard to draw any conclusions from those few minutes on the pitch as Huddersfield were a team in utter disarray but he certainly didn’t lack confidence, picking up the ball and trying to make things happen several times.

The last hoorah for the match and a suitable example to where things had descended was Steve Cook dribbling from one end of the pitch to the other and nearly making it all the way through with only his final touch being too heavy which allowed the keeper to reach it first.

A day at the office you’d like to replay every week if you can. We mustn’t dismiss Huddersfield’s decision to rest key players allied to other crucial men being injured. It was a seriously weakened opponent that went onto the pitch but the Cherries showed no mercy in putting them down.

Man of the match against Huddersfield

For the first time in a long period, I feel that every AFCB player gave their all. I know that some were not quite awesome but they all deserve a lot of credit. Shades of the Championship-winning season? – Join the conversation, click here.