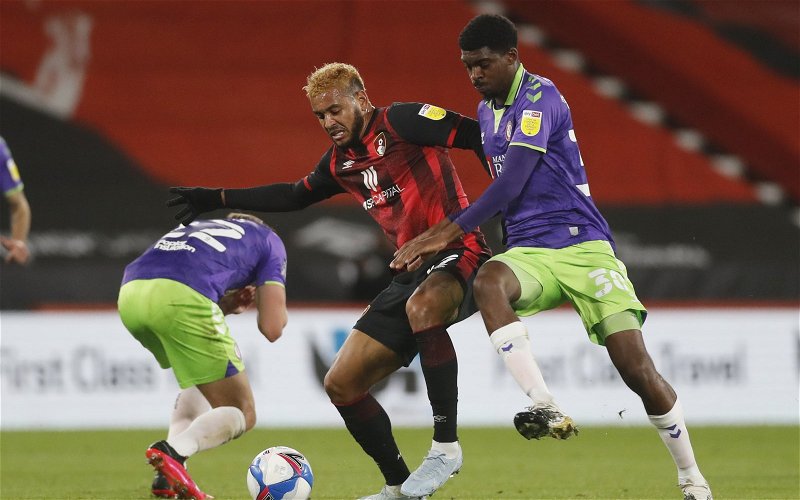 The two expected departures were confirmed with Jack Simpson and Nnamdi Ofoborh leaving with both joining Scottish champions-elect Rangers, albeit Ofoborh’s move north of the border is via a loan move to Wycombe Wanderers for the remainder of the season.

Simpson was set to join Rangers in the summer but has now made the move immediately after Rangers and AFC Bournemouth agreed on a sell-on clause as compensation, according to Sam Wallace of the Daily Telegraph. The 24-year-old has signed a four-and-a-half-year deal at Ibrox.

Nnamdi Ofoborh has signed a four-year deal with Rangers which begins in the summer of 2021 until that move happens he will spend the next three and a half months with Wycombe Wanderers.

As Ofoborh rejected a contract offer to remain at Dean Court and is only 21, the Cherries will be due a training compensation fee believed to be six-figures.

🆕 #RangersFC are this morning delighted to announce the pre-contract signing of Nnamdi Ofoborh from AFC Bournemouth on a four-year deal which will begin in the summer.

The final departure was that of Joshua King, finally ending his Cherries career after five-years. The Norwegian international has been desperate to leave the south coast since the clubs relegation during the summer of 2020.

During the earlier part of the January transfer window, King had been linked with a potential move to either Burnley or West Ham United, but when those moves looked unlikely, AFC Bournemouth manager Jason Tindall announced that King had declared that he would be remaining with the Cherries until the end of the 2020/21 season and would then leave Dean Court as a free agent.

However, on transfer deadline day, interest from both Everton and Fulham made it clear that King had played his final game for AFC Bournemouth.

According to Alex Crook from talkSPORT, Fulham had offered King a deal that would enable him to leave Fulham in the summer as a free agent and at one point looked the favourites to sign King.

Confirmation that #EFC and #FulhamFC #FFC have both had offers for Josh King accepted. Up to the player now which club he joins. And Shane Long definitely being pursued as a potential replacement

But it was Everton who got the deal over the line. Who announced the deal was until the end of 2020/21, which included a nominal fee for the Cherries.

BBC Radio Solent journalist Kris Temple believes the deal could be worth as much as £5million.

BREAKING: 🍒 #AFCB striker Joshua King has chosen to join #Everton. Will be a short term permanent deal, with the Cherries receiving up to £5m potentially. pic.twitter.com/DPpSvcs9eJ

Despite the final twelve months of his time at Dean Court, Joshua King will probably go down as the greatest signing the club ever made. Snapped up in a deal worth just £1million from Blackburn Rovers, King went on to make 184 appearances in all competitions scoring 53 times.

48 of those goals came in the Premier League making him the clubs leading goalscorer in the English top division.

The guy wanted out and has been part of a squad that hasn’t looked like they give a toss for over a year. A great player for us but we desperately need a shake up and he wasn’t the answer to our problems.

Wasn’t he injured a lot of last season? Then scored a few goals when he did play and had a couple of goals disallowed as well. He’s also played well on and off this season. I would say he may have lost focus naturally because he thought it was time to move on but I don’t think it was deliberate. He wasn’t being picked, either, which couldn’t have been great for his confidence. The migraine thing was weird… but he did have Covid later. I mean choosing to remember him as a good player for us who generally put in really good shifts but just decided to move on. He’s no different to 90% of footballers. He didn’t owe us loyalty to want to stay on. Look at how brutal the club have been with Gozzo. They don’t have pushed him out when the time was right too. On the payroll, he had a duty to work hard and I think he generally did. Good for him if he wanted to move on.

A good speech but, Nah, my opinion differs. He had one good spell scoring 16 goals but the rest has been indifferent. Unfortunately, the Man Utd thing last January probably did it for him as a Bournemouth player and I don’t think we ever saw a true commitment from him afterwards. He contributed to us being relegated and I think everyone was surprised he was still with us at the start of this campaign, including himself. Arguably we played better at the start of the season without him but JT seemed to want to shoehorn him in, and why not, he was meant to be one of our better players after all. Unfortunately, all I saw in him this season was half-arsed. However, your right that over the years he’s been with us he’s been a half-decent servant and it is a slight shame that he’s left scurrying out the back door on a pathetic loan deal to the end of the season. It’s a shame we couldn’t have got some decent money for him but he didn’t do the decent thing for us and sign an extension that would mean we could’ve commanded a fee for him. He came very close to becoming the Wee Turd 2. We all remember players differently but for me, I’m glad he’s gone. – Join the conversation, click here.