The highs and highs of Howe at Bournemouth 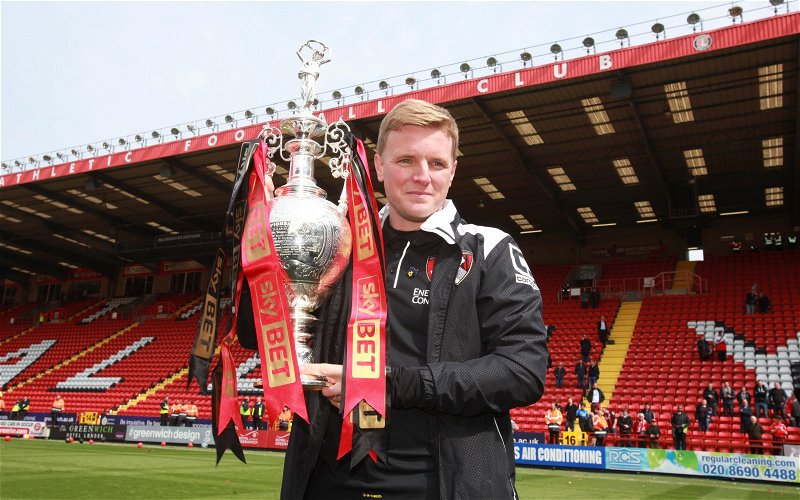 On New Years Eve 2008, Eddie Howe was named as caretaker manager of AFC Bournemouth following the departure of Jimmy Quinn after just 121 days as manager.

Howe went on to complete the unbelievable feat of avoiding relegation from the Football League, after a seventeen point deduction and being 10 points from safety with half the season to play. It was a feat that saved the football clubs very existence as relegation to non-league would most likely have sent the club into oblivion.

The Cherries avoided the drop with a game to spare. The following season, Howe once again defied the odds by winning promotion with the same set of players after operating under a transfer embargo for 16 months.

Despite Howe’s departure in January 2011, the combination of Lee Bradbury and Steve Fletcher saw AFC Bournemouth reach the League One play-offs, only to lose on penalties to Huddersfield.

The defeat saw a mass exodus of players, Bradbury and his successor Paul Groves would come and go and in October 2012, AFC Bournemouth were in the relegation zone of League One.

After a week of speculation, Howe and assistant Jason Tindall both made a sensational return to the Cherries on 12th October 2012, with Howe sighting personal reasons for his departure from Burnley.

With the team in the bottom four after just one victory in eleven games, the impact was instant, an eighteen game unbeaten run followed, with fifteen games in the league.

The run eventually ended, but the Cherries heads didn’t drop, with five consecutive wins completing a turnaround that saw the side close down a 21 point deficit to former leaders Tranmere Rovers, to league leaders in just four months.

With the difficult task of playing catch up completed, the Cherries then suffered a wobble, losing the next five consecutive matches and the team slipped from the top of the table to seventh and out of the play-off places.

The chance for automatic promotion looked to have gone despite the impressive run over the previous four months, but Eddie Howe had one more trick up his sleeve and that was to declare that he wanted his side to win all of their remaining games.

With nine games to go in the season the Cherries recovered with victory over Stevenage. Then wins came against Oldham, Bury, Colchester, Scunthorpe, Notts County, Shrewsbury and Carlisle. An all-time club record of consecutive victories and with Doncaster Rovers, Brentford and Sheffield United all slipping up, promotion to the Championship was confirmed with one game of the season to go.

The Cherries missed out on the League One title after drawing with Tranmere on the final day, but the only thing that really mattered was achieving promotion to the second tier for only the second time in the club’s history.

But even greater things were set to happen at AFC Bournemouth, with the club enjoying their greatest ever season with an array of not only club records, but Football League records.

AFC Bournemouth’s 8-0 victory over Birmingham City in October 2014 was the biggest away victory ever recorded in the second tier of English football, by anyone.

It was the Cherries biggest victory since joining the Football League in 1923 and it was Birmingham City’s largest home defeat in their history.

Callum Wilson’s goal at Reading was the Cherries 47th away goal during the 2014/15 season, a tally which beat the all-time record in the second tier previously held by Sheffield Wednesday in 1951/52 and Chelsea in 1988/89. The club would finish with 50 away goals.

In November the Cherries won six games in succession, breaking the previous season’s record in the second tier.

The Cherries unbeaten run of 14 league games, between October and December is also a record for the Cherries in the Championship.

Victory over Rotherham United in January set a new record for the most away victories in the second tier for the Cherries, they would end the campaign with 13 away victories.

Against Fulham in March, Brett Pitman’s opener was the clubs 68th goal this season, breaking the record for the number of goals scored in a single season in this division. Once the campaign had finished AFC Bournemouth had scored 98 goals.

A dramatic final day saw AFC Bournemouth clinch the Championship trophy with a 3-0 win over Charlton Athletic. Watford had to win to claim the title, however, they conceded a 91st-minute equaliser to Sheffield Wednesday. Unsurprisingly Eddie Howe’s AFC Bournemouth broke the club record for highest points (90) and table finish.

The impossible dream had been realised, AFC Bournemouth were heading into the Premier League, the top flight of English football for the first time in the club’s history and with it, manager and players could write their names into the history books at every turn.

Virtually all club records had either been broken or were set to be.

The 2016/17 campaign would see AFC Bournemouth finish in ninth place in the Premier League, setting a club highest finish with 46 points, scoring 55 goals in the process. This would turn out to be the Cherries most successful season in the top flight of English football, but more highlights would follow.

The 2017/18 and 2018/19 campaigns saw AFC Bournemouth finish ahead of both Southampton and Brighton & Hove Albion to be ranked as the number one club on the south coast.

Victories over the likes of Arsenal and Tottenham Hotspur, were added to previous wins over Chelsea, Manchester United and Liverpool so that every top scalp with the exception of Manchester City had been taken during AFC Bournemouth and Eddie Howe’s Premier League era.

Ultimately however the journey would end for both AFC Bournemouth and the Premier League and Eddie Howe himself.

A season full of controversy with the addition of a Video Assistant Referee chalking off goals that would have stood in previous campaigns, the Coronavirus pandemic suspending the season for three months, only to return without supporters in the ground, the change of rules to accommodate five substitutes, tactical drink breaks and goal-line technology failing for the first time in 9,000 matches would result in AFC Bournemouth being relegated on the final day of the season by a solitary single point.

The domestic season summed up by Arsenal dropping the FA Cup trophy before they had even lifted it.

In the six days that followed relegation, one of AFC Bournemouth’s greatest ever players is reportedly set to leave the club for a Championship record fee of £41million. Dutchman Nathan Ake deciding that if you can’t beat them, join them, as he is set to join Manchester City.

Player departures following relegation are a certainty and all of the Dean Court faithful wish him well with his career.

The departure of Eddie Howe, however, didn’t feel like it was a certainty and his departure will be a lot harder to come to terms with for many AFC Bournemouth supporters.

The word legend is used far too often in football. Even some statues are thrown up far too quickly, but both seem fitting for a man who ripped AFC Bournemouth from the jaws of extinction, dropping down to the fifth tier of English football and probable oblivion, to three promotions and five years in the Premier League.

That is a story that will never be replicated again at this or any other club in this country. Those achievements will never be taken away from Howe or this football club, despite their paths now heading in different directions.