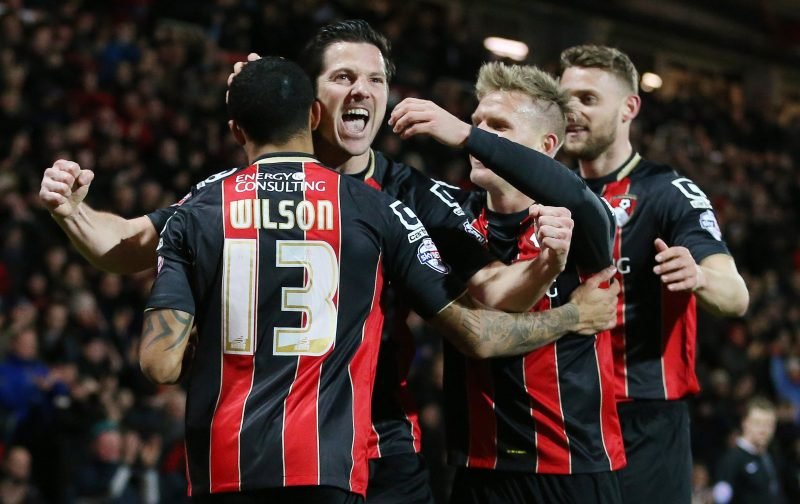 === SIGNING ===
How quickly did the move to AFC Bournemouth happen for you? It seemed to come out of the blue for us fans?

“We had a diﬃcult time at Charlton in our second season in the championship and the lack of investment from the new owner was blatant. I was due a new deal but it didn’t look like it would happen with him, especially after hearing I was too old. I felt the manager Chris Powell was in danger and might be sacked really soon which would be for me a big blow…

“In January I had been told Bournemouth made a bid for me and the new board at Charlton accepted it despite being low at ﬁrst. Someone at the club told them it was not enough to accept the bid so ﬁnally Bournemouth had to put a new bid on the table and Charlton accepted it. After hearing I was too old and even “not that good” for the owner to deserve a new deal, and seeing they accepted a bid to sell me, unfortunately for me it was clear my future was elsewhere than Charlton.

“The dream to end my career at Charlton was over with this new owner.

“A few weeks later Chris Powell was sacked at Charlton and I deﬁnitely knew it was the right decision to leave considering the situation at the club.

We were very much the new boys in the Championship when you signed. Did you know much about the club or area before coming down?

“I didn’t know much about the club to be honest but my meeting with the manager convinced me to sign for Bournemouth. He was really determined to sign me which was key and he showed me some clips to see their style of play so I could understand his philosophy.

“Finally, he told me he was not interested in players above 30 usually but he thought I could be the “last piece of a jigsaw” to make his team really compete in the Championship and that just enlightened his desire to sign me.

“After that, I was conﬁdent to sign at the right place with the right manager…

My note: Yann talks with Hot Radio (ha!) after signing –

There has been much debate amongst us fans about the size of the stadium. We all know we could fill a much bigger one whilst we’re in the Premier League but it’s a big unknown what numbers we would have if we went down. However, some fans are convinced that the current relatively small stadium may impact the decision some players make on whether to join. What do you think about that generally? When you signed, did the smaller stadium compared to Charlton give you pause for thought?

“I think, and that’s my opinion, that the most important thing when you sign for a new club is the manager, the quality of the players and their style of play. After that of course, a nice training ground with a big stadium and a big fan base can make the diﬀerence, especially in the Premier League. It’s clear you would prefer to play in front of 50,000 fans instead of 10,000!
Personally, when I signed for Bournemouth it didn’t aﬀect my decision to sign even if the stadium was quite small compared to The Valley or other stadiums in the league. And to be honest I loved Dean Court because it’s better to play in a packed small stadium with chants than a half-empty big one with no atmosphere like it is at some big stadiums…

“I did love both of them (Dean Court and The Valley) because the atmosphere was great and the fans really kind!

In all my years of watching AFC Bournemouth, I can’t remember another striking partnership forming so perfectly and so instantly as the one between you and Lewis Grabban. Was it as natural as it seemed as soon as you started training together?

“I don’t know but I think he is not a real number 9 and me too so we liked to link together. We liked to swap positions. But the main thing is we had different qualities. He was more a striker to score with through balls and me I was more here to score from crosses so we had that force and I was quite the same with Callum (Wilson) the following season even if I think Callum is more a proper 9…

When Lewis left that summer, what were your thoughts about losing such a great partnership not long after it had been created? Particularly before training had started and so you hadn’t seen Callum in action.

“I remember having a meal with the squad at the end of the season and Lewis was linked with a big move to Norwich which might be difficult for him to refuse. I tried to convince him to stay saying that if we can keep hold of the players and add 3-4 good additions, we could definitely be in contention for the play offs at least or even automatic promotion with a good start to the season… Unfortunately, he left and we bought Callum Wilson and the rest is history!

At AFC Bournemouth you had a great song. How did it make you feel to hear that ringing around the stadium?

“The song was crazy because it was quite simple but so addictive! I loved it and felt like the fans never stopped singing it! It gives you even more desire to run everywhere and give your best every minute…

“That’s a song I will never forget!

My note: Relive that chant –

Part Three will be online at 8am.