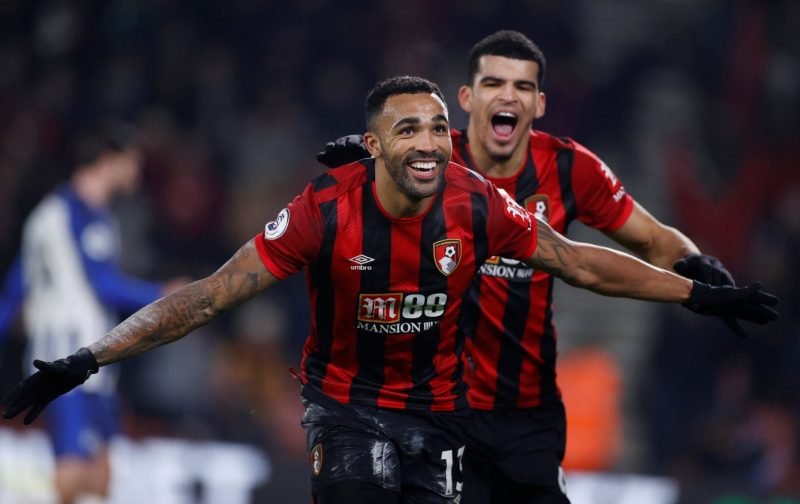 Mainly on the back of his performances during the 2018/19 Premier League campaign, Callum Wilson had found himself as one of the most wanted strikers in the top flight of English football.

14 goals and 9 assists from 30 appearances had left him reportedly in high demand, Wilson was linked with West Ham United, Chelsea, Tottenham and Everton and an eyebrow-raising figure of £70million was being touted, but Wilson would eventually go on to sign a new contract with the Cherries until the end of the 2022/23 campaign.

This season he had struggled to hit the same form that he once enjoyed, but in September he was still linked with Manchester United, but as Old Trafford manager Ole Gunnar Solskjaer later made a move for Joshua King, during the January transfer window that link looks unlikely to be accurate.

Wilson has confessed that he found the speculation flattering but has admitted that his form this season, which has seen 8 goals and no assists from 28 appearances, has not been good enough this campaign.

“Of course it is flattering, they are great clubs, massive clubs in the league…”

“…Any player would like to play in the Champions League and progress, that’s what I’ve based my whole career on.

“First and foremost is obviously keeping Bournemouth up and safe and I haven’t been good enough this season to even be talking about things like that.

With the suspension of the UEFA European Championships this summer, the tournament is now scheduled for the summer of 2021. Giving Wilson time to work his way back into the England set-up ahead of the tournament.

“…It’s about focusing on your club and then international football comes on the back of that.

“I’ll just be focusing on myself week in, week out and then come the end of the next season, hopefully I’ll find myself in the squad.”

At the start of this season, I couldn’t really see a situation where he wouldn’t make the Euros squad for England. However, unless he has a remarkable turnaround in form, he’s maybe played himself out of contention.

Even with us finally seeing a couple of proper centre forward performances from him, that fluffed finish at the end of the Liverpool game would raise the eyebrow of any manager. Imagine that happening in the last minutes of an England game?

If he carries on as he is I can only see him making it by default for lack of enough other options. However, perhaps the cupboard isn’t actually all that bare. In addition to a hopefully fit again Kane, Southgate must be looking at Ings, Abraham, Calvert-Lewin as well as the obvious likes of Rashford. In fact, Gareth may even try and get Vardy on the phone to see if he fancies one last tilt given the question marks over Kane.

I hope Callum realises it as a spurt of goals in the last nine games would probably erase the memory of the rest of the season and secure him a place. We need it and so does he. – Join the conversation, click here.