Sharp reminder there’s work to do 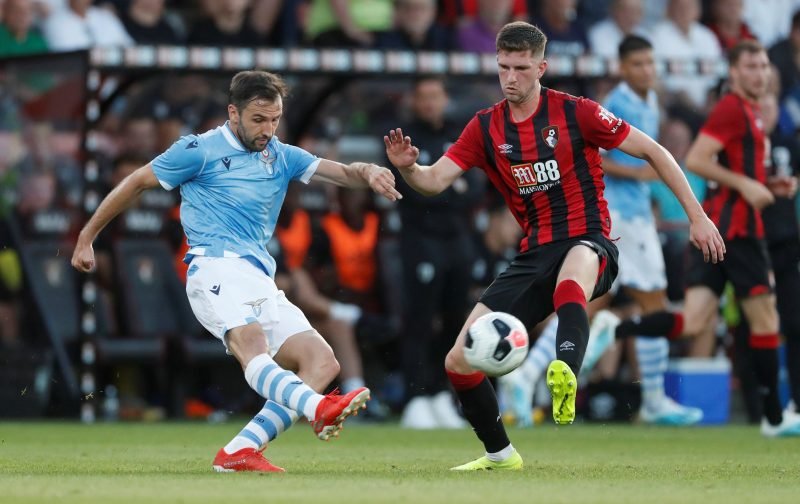 A great summer’s trading, the unexpected bonus of not losing any star players and inferior (on paper) opposition meant that Bournemouth fans skipped into Dean Court full of anticipation. They left grumbling with the same frustrations that dogged the season before. Sporadic individual form, odd tactics and indecisive substitutions meaning once again the team was lesser than it’s individual parts and a scruffy plundered equaliser from perennial Championship hitman Billy Sharp nicked a late deserved point for the Blades.

Ramsdale was the answer to the question on most people’s lips entering the ground – the young keeper winning the battle of ‘not quite the full ticket’ keepers to be given a chance to cement a place with Boruc able to give a demonstration of the most lethargic warm-up ever around the 50th minute as he warmed the bench. With Danjuma the latest entry to the treatment room the forward line picked itself and the biggest oddity was Eddie’s new 3-4-3 formation with Smith and Rico as wing-backs. Billing made his debut in midfield – the only new signing of the five to make the cut.

It was the Blades who made the early running, not yet softened by cricket scores at Anfield and the Ethiad and looking like they still believe – rightly so on today’s evidence of manipulating triangles neatly and defending well. Ramsdale was smart when Mepham was beaten too easily by a ball over the top and McGoldrick went clean through. Only 30 seconds were on the clock but it didn’t offer any signs of a game packed with chances as the game settled into a lot of slo-mo football from both sides with little to report.

Bournemouth were labouring a little and looked to be finding their way around a wing-back system where Smith was far more prominent than Rico who I worry the players seem reluctant to give the ball to. We still look like a side that needs to break rather than play through teams with the lack of a clever ball manipulator (presumably soon to be H.Wilson) once again evident. When we did lure Sheffield United forwards enough to break – three times we picked the wrong options in great positions reminiscent of goals last year. Eddie looked very frustrated.

At the other end our defence was looking pretty solid with Ramsdale saving well on a couple of occasions it was breached and it all had an air of ‘waiting for something to happen’ even VAR refused to inject talking points by rejecting everything asked of it.

The second half started the same way as the first – McGoldrick released in a good position, this time no save necessary as the ball flashed inches past the post. Once again the home teams’ attacks looked like action replays and the ball circulated too often when good runs were made but missed. The Blades had more of the ball than the first half, the difference was Bournemouth didn’t seem to be able to work the breaks as too often the ball out was sloppy.

It was a surprise there was a goal really but the home side did take the lead. The prelude was one of those ‘great goals that never were’ when Billing’s absolute pile-driver of a 30 yarder was phenomenally finger-tipped wide by Henderson. Like Gomez’s save for Cook’s overhead kick, it denied a goal to remember for a long time. This got the crowd and the side finally going for a bit and when a free-kick was won out wide Billing headed it back across, Wilson’s shot was saved and MEPHAM bundled home his first goal for the club.

There was a brief purple patch but Lerma and King had shots blocked before a familiar sight to home fans emerged. Bournemouth sat deeper and deeper, United suddenly started to believe, the three forwards became isolated and the question became would United fashion a chance or not. Fifteen minutes of attack and defence with no substitutes or tactical changes forthcoming. With two minutes to go the hammer blow was struck… A quick free-kick caught Rico asleep in the left channel and after Burnie McBurnieface’s shot came back off Ake, veteran poacher SHARP bundled home an equaliser to set the travelling hordes into ecstasy.

King 5 – One of his frustrating over playing days
Wilson 5 – Hold up play poor and very quiet/well marshalled
Fraser 5 – Didn’t quite get his free role – some poor choices.

A frustrating afternoon. I sometimes worry the more talented our squad gets the less it seems to gel. Eddies battle to replace the telepathic understanding of his promotion team is his biggest challenge every year and today was no different. It was all very safe and slow – not the qualities of any recent team’s success.

The positives were Ramsdale looked confident, Billing as well looks like he has a sweet left foot and good vision and Lerma returned like he had never played Copa America. The negatives…I still worry about Rico despite desperately wanting him to succeed and the system I don’t think suited the players we had available. We like 4-4-2 and 4-3-3 is an easier switch from it than a back three/five and it would get us over the ‘we can’t play two in central midfield without being over-ran’ and haven’t since Arter went off the boil.

I’m not going to bang on about training as it upsets a few people but today, with another key player injured in training and the players looking so heavy-legged compared to Sheff Utd to me screams the question if we have the coaching knowledge with top-class players. We should at least have been able to match them for energy. Eddie admitted after the game some players were dead on their feet…which begs the question…….why? And the other question – why not use a substitute? Would Harry Wilson have weakened that side with a late cameo (and he would have been on for the free-kick), would Daniels have done a worse job adding a bit of energy to the left-back role….. would Ibe have maybe beaten a man in a one on one where the other’s failed. It seems very odd that we watched ourselves get over-run and not change either the system or one player.

With Villa and Man City coming up we may well regret not hanging on for those three points but impressive as Sheffield United were…….we only have ourselves to blame, and mainly off the pitch.

The huge issue today is that too many of the players out there were not the right fit to play in the system they were asked too. Mepham looked completely lost in a back three, Fraser is a winger whose entire game is based around his fantastic crossing ability and playing him centrally completely stifles his effectiveness. King also is not a naturally creative player, we once again find ourselves lacking that number 10 who can link midfield and attack. Playing a winger and a striker there just didn’t cut it. We basically rely entirely on either set pieces or counterattacks with this personnel and set up, Sheff U didn’t let us counter today much so we were bloody lucky we nicked a goal from a set-piece! – Join the conversation, click here.