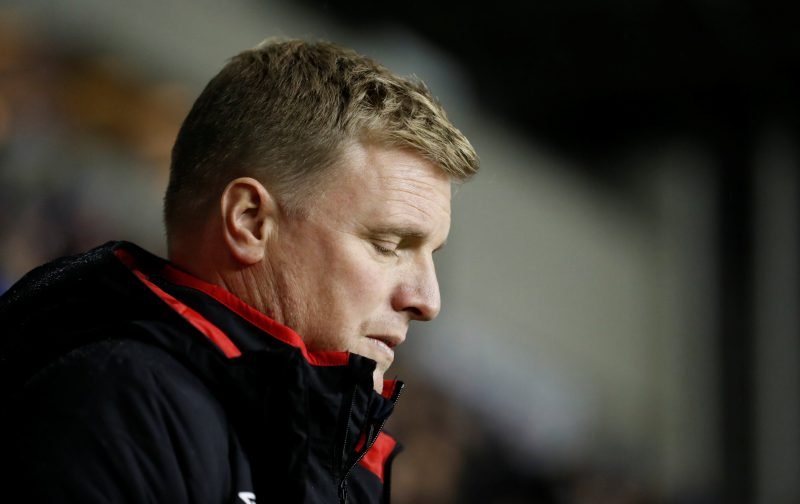 After thirty long years of waiting, doomed Spanish soap-opera Eldorado can finally justifiably state it is no longer the worst showing on BBC prime time tv. That honour now sits firmly with AFC Bournemouth who took us on a slow scenic railway journey from mediocrity to clueless in 96 minutes to forget on the Beeb tonight.

So much had changed, the strange sites of hazmats in the ‘crowd’, drinks breaks, piped crowd noise, black lives matters protests – it was a surreal experience and the watching fans craved normality. Thankfully the players had that covered and rolled the clock back to pre-COVID days with a clueless, dispassionate, limp performance that took us back to the halcyon early 2020 days of Bush fires and floods. For 96 reassuring minutes, it was like this bug had never happened……..

Eddie started with Brooks back playing off Callum with King relegated wide again to his obvious frustration and Harry on the other flank where he has looked so lost for most of the year. The rest of the side was as expected with maybe the exception of Cook ahead of Gosling.

The game lacked energy and zip from the off aside from the odd nice touch from Brooks and some comfortable play from Lerma. From pretty early on you could see that we were still set up to counter-attack and any hopes Eddie would have used the extended break to commit more men forwards was quickly ruled out. He was sticking to the game-plan of the last two years. Palace are a similar counter-attacking side (just with a better defence) and Zaha cut in and shot just over on their first break.

The early goal we didn’t want to conceded came when Brooks nudged Zaha on the edge of the area. MILIVOJEVIC is a renowned free-kick taker and his execution with his right foot was superb catching Ramsdale slightly on his back foot as the ball bent and dipped into the top corner. Bournemouth looked shell-shocked – no other side can fall behind so often to a first shot on target. Its a real sucker punch and it showed as the team settled into a pattern of awful passing and lack of movement.

The worst thing that could have happened was a crushing second blow but it came. Harry Wilson’s inability to track an overlap is so well documented it was probably in the Doomsday book and he reverted to type to allow an intricate move to completely catch him out down the left and AYEW to score with ease on Van Aaholts pull back. It was game-over really, we knew it, the players knew it – only Crystal Palace and the watching millions had hope of a come-back.

The first half played out in a predictable pattern (bored writing this hope you are not bored reading it) with nothing to report. No shots on target once again in a first half.

The second half saw Harry give way for Danjuma and he looked lively to be fair in places. Unfortunately, Palace had absolutely no reason to attack having found themselves in the rare position of scoring twice. That gave us a lot of possession against a deep sitting team – guaranteed Bournemouth frustration.

The players came and went – King limped off probably never to be seen again, which brought the goal machine Solanke to the touch-line, bouncing up and down like a horse racing jockey and with all the same aerial ability. He was soon on and had one moment where the goal loomed, his moment beckoned – that prime time TV thunderbolt he had dreamed of since a kid. The nation shuffled towards the edge of its sofas…. Bournemouth fans picked up the newspaper……Dom made his usual mangled foot connection with the ball that just about made the touch-line somewhere between the corner flag and the goal-post.

The only threat, Brooks, dropped with cramp and was replaced with Stan enjoying an injury-free spell since March.

That left one question. Would Bournemouth complete another game without a shot on target? There’s been a few and it’s always an impressive stat for a home side. It was looking likely then Ake ruined it, rising above Cahill to cushion a soft header straight into the hands of the keeper.

After that Palace spent the game running into the corner flag and Bournemouth spent the game passing to them. Zaha and Cahill missed good chances to make it worse – thankfully they didn’t. That brought an end to a game so bad that even though I’ve had my refund and didn’t use petrol I still feel cheated.

The only hope we had is that the team that had shown some guts and desire in the last seven or so games turned up raring to go. Instead, we got the abject ***** from the two months prior to that. This was the same boringly depressing performance as at Selhurst Park, which was one of our worst performances this season – which says something.

I really can’t see them getting out of trouble, to be honest, they deserve to go down. I also can’t see me watching many more games for the rest of this season either. I don’t particularly like this version of football and our performances aren’t worth putting up with it for. – Join the conversation, click here.