Opinion: I don’t want Eddie Howe gone, I just want him to be better

I don’t want him to go, but he’s certainly not doing himself any favours with the awful performances and strange tactics he’s employing.

I’ve said for years that Eddie Howe isn’t really a top-class manager in the tactical sense, but he is (by many accounts) an excellent coach and motivator of players. He can get miracle performances out of players and has them running through walls for him.

Will AFCB get relegated? 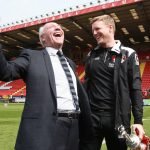 However, when this is no longer the case, the other side of his management gets exposed, kind of brutally. I haven’t agreed with a starting lineup for months now, I can’t understand the thought process behind half of his starting lineups, and I don’t understand what we as a club are even trying to do anymore. We have five fit central players available, and our midfield is constantly overrun, yet we stick with two. We have no fit Left Back available, so instead of opting for 3 at the back, with Adam Smith and Ryan Fraser as wingbacks, we shunt Nathan Ake out wide- even though he’s just returned from a hamstring injury. We have three central midfielders on the bench and a youth striker, not the players needed to make any significant tactical changes, yet we have bigged-up youths like the creative Kilkenny and Dobre nowhere to be found. We have senior players like Simon Francis throwing young Mark Travers under the bus and taking no responsibility for their mistakes; instead, we have Ake being thrown in front of the media to justify the performance, even though he’s just come back from injury and is playing in a different role. Where’s the captain??

Callum Wilson hasn’t had a shot on target since the 6th October! I’ve given him some stick, and he definitely deserves some stick, but that is such an obvious indicator that we aren’t creating nearly enough chances, and yet we persist with the same tired approach to every game. Are we missing Joshua King? Yes; but even when he was playing, he was left on his own to charge up the pitch and create chances for himself. Remember when we used to play the ball down the channels, and players like Wilson, Marc Pugh and Matt Ritchie (two of which are slow) would latch onto it and score? You don’t need confidence to play hit and hopes and run around, surely?? Then there’s Dominic Solanke; is Solanke good enough? No, at the moment he’s not. But he’s not exactly being given a good platform to show what he can do, is he? The attackers and the midfielders are like strangers; there’s no movement from any of the strikers, and there’s not one ounce of creativity from any of the midfielders. Harry Wilson is lightweight, weak, slow and poor at beating his man- but he’s a goal threat, and he can pick out a pass. Try him behind the strikers! Hell, try Kilkenny there! What have we got to lose?!

I don’t want Eddie Howe gone, I just want him to be better, but failing that I want him to at the very least learn from his mistakes, and not come out with same old, tired, post-match nonsense about focusing on the next game. All the problems are happening right now, not tomorrow, and not next Saturday!

Maybe I’m just weird but I’d rather Eddie stayed and we went down than him leave and some other manager somehow keeps us in the Premier League. For me the Premier League really isn’t so important, it’s more about the club and the story we share with Eddie. I think it would be such a shame for that to end on a sour note. I’d like Eddie to stay and continue building his team based on the next generation, in whatever division that may be and however far this new team may take us.

The only exception would be if Eddie’s health and family life were suffering as a result of his job. Then, of course, I wouldn’t want him to stay to the detriment of these more important matters. – Join the conversation, click here.

Do you think Eddie Howe should stay as AFC Bournemouth manager? Vote on our forum poll here.

At time of writing, Eddie Howe currently has the support of 91% of the registered users of the forum, with 141 votes cast.