No Quality, All Street In Drab Draw With Hatters

In the final match before Christmas, the Cherries travelled to Luton, a fellow former favourite of those in charge of the Football League in the darkest of days. Jason Tindall eschewed his earlier season tactic of rotating every game to keep the same XI for the third match running.

It was another slow start as Bournemouth seemed to lack zip going forward. It’s hard to pinpoint whether this was heavy legs from the recent schedule, the heavy pitch slowing them down or something else. One thing for sure is that we saw a lot of heavy touches across the board from Tindall’s men.

Luton were disciplined in their shape but also tried to be ambitious going forward. Early attacks saw as many as eight men in and around the Cherries box as they tried to find a way through or push for a mistake. This was no backs against the wall and hope for a lucky break set up.

In fact, the ball pinged from one end of the pitch to the other like a game of blow football only with worse control on display. If a player’s trapping didn’t let them down then they dribbled into dead ends or overhit passes. The lack of quality on the pitch from both teams was stark.

There were moments where you could see what each team was trying to do but simply failing to achieve when it came to the execution. It reminded me of a League One game where you’d have to accept the players were trying to do the right things but often didn’t quite have the level to make it come together. Only, at least one of the teams should have been fielding more than enough ability to make it happen.

On 20 minutes the first genuine effort on goal came and it was from the Hatters. Simpson was skinned on one side of the area and could only respond by fouling his man. The free-kick was drilled straight at goal from an angle but iron-strong hands from a diving Begovic kept it out.

There were a multitude of terrible attempts to score in the half but the only other one of note came on 35 when Luton stormed through the middle of the park unchallenged after a gap opened up following an AFCB player pulling out of a challenge near the halfway line.

As the ball came into the area and defenders were forced to commit themselves it was slotted to the free Luton attacker wide right of the area who leathered the ball into the far corner of the goal to make it 1-0. Or, at least that would have happened in almost any other season but this season Begovic is seeing it like a beach ball and flung himself to the right to make yet another great save. Still 0-0 after all.

The whistle went on the first 45 with the Cherries desperately in need of one of JT’s half time switches and tactical interventions that have often proven so effective this season. Therefore it was a surprise to see no changes as the team came out for the second period.

Bright points from the second half included Lewis Cook being consistently the best outfield player in a Cherries shirt. Simpson continuing to look mostly comfortable as, just after turning 24, he finally gets a run of starts in the first team. Rico getting on the ball a lot and at least looking like he was trying to make things happen after coming on as a sub. That was about it.

Bournemouth failed to create a single chance of note in the whole match. The Luton keeper could have sat in his goal munching on mince pies such was the lack of action for him over the 90 minutes.

The moment that typified the match more than any other for me was Lerma falling over weakly near the centre circle when he would have been in space with the ball if he’d stayed strong. Then, when the free-kick never came, rather than getting up like the terrier we know he is as he would still have been clear favourite to get to the ball, instead, he chose to sit back like a sulking schoolboy. Luton broke and it took some good defensive work to save the situation. About as un-Lerma a moment as I’ve seen since he signed for us.

Luton almost snatched it on 88 when their newly arrived sub chased a ball through the middle and looked set to slot past the out-rushing Begovic until a nudge from S Cook conspired to prevent him making clean contact allowing Asmir to keep it out. Another ref may have looked unkindly on that incident, certainly in the seen them given territory.

The final moment of the match saw Simpson balloon the ball over his own bar from a few yards out after a low cross was fired in. He’ll tell you it was a brilliantly judged clearance. I doubt he could keep a straight face when doing so though. Still, sometimes young(ish) players deserve a little luck.

The match ended and whilst Boris was leaving much of the country in tiers, this was the footballing equivalent of a depressed sigh. The quality never showed throughout as it descended if not into a street fight then a stop, start walking war. Whatever the opposite of exhilarating is, this was it. 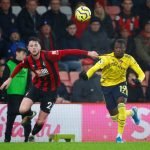 Accurate report, thank you. It was deadly dull but a point’s a point. The pitch was awful and it was like watching an episode of The Big Match on a wet weekend in the ’80’s with tired players trying to stay upright and control a ball with unpredictable bounce.- Join the conversation, click here.