Kane gone but Spurs on Son? 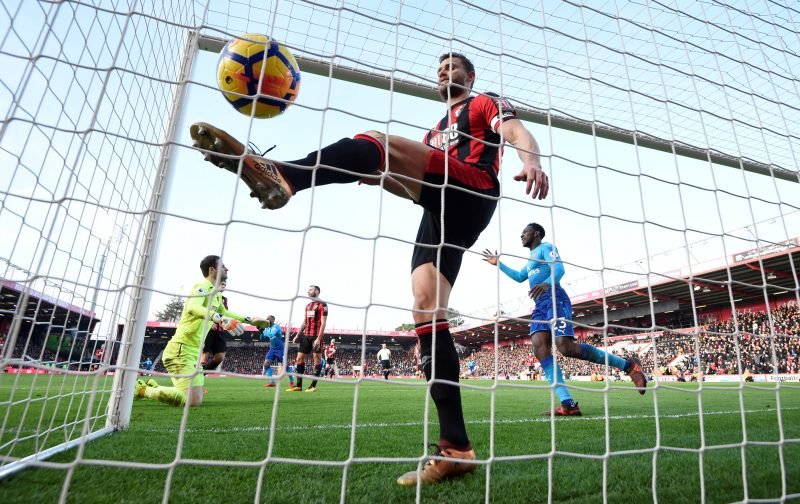 Bournemouth’s once a year humping by Spurs materialised on a dank afternoon at Dean Court but the performance offered hope for the run-in. The record books will record a three-goal margin but the reality was a much closer game than the other thrashings – just not as stifling as the twice we have kept the score-line closer. Either way, Tottenham`s bogey team status remained.

Eddie sprang a surprise in his line up ‘resting` King and introducing Mousset for a rare league start. The formation remained stubbornly at 4-4-2 though with Smith on the right wing. Mousset dominated the early exchanges as well, playing like a man possessed?His fantastic run onto Cook`s through-ball saw him and Stan escape the Spurs defence all together and the latter should have done better than hit the crossbar with a dink when Mousset unselfishly slid him in.

STANISLAS didn`t have to wait long to atone though as Bournemouth went for the high-press jugular with style. Smith`s barnstorming run and cross finding its way through to the winger who drove back across Lloris with aplomb. It was all Bournemouth – Gosling and Ake snapping into tackles, Mousset and Wilson running the channels it was great. The question on everyone`s lips though was how long could they keep it up and sure enough the intensity started to drop although the shape stayed very strong.

When Kane limped off following an awkward fall while scoring a disallowed goal Bournemouth`s hopes would have risen further – the only time we had taken a point of Spurs was when the England hit-man was missing. So, one-nil up, Kane off what could go wrong? Well – Begovic – who had been handling the ball like it was a searing sphere of molten steel all afternoon – had other ideas, and his hesitant stop then start on Aurier`s cross allowed him to be beaten to it easily by ALLI. Had he come or stayed he would have been in a much better place.

It was Spurs first meaningful shot on goal – a very deflating (for the team) and common statistic at Dean Court. Still Bournemouth did rise again and finished the half the stronger with Mousset`s drive well parried and Smith pinging one just past the post.

The second half saw Bournemouth again employ a high press and energetic opening. Francis pinged a fantastic drive with Lloris did really well to keep out a full stretch. From the resulting corner Ake had a free-header but seemed surprised and got under what was an excellent chance. Begovic made a good save to keep out Eriksen as the game went end to end. Francis was growing majestically into it with one of his best performances of the season.

The next goal was going to be pivotal with both sides attacking freely. Unfortunately for the home team it was Spurs that got it – again question marks over Begovic`s role as he fell back early and allowed SON`S mis-hit shot into the top corner.

Eddie was just about to bring on Arter to shore things up a bit but the combative Irishman had to pop his track-suit back on and instead King and Ibe were introduced for Daniels and the rapidly tiring Mousset. It was game on again and with Bournemouth still playing on the break the pace on the pitch was frightening. Spurs defence held strong though with limited chances except for Gosling shanking one badly from a good position. The golden chance came and went when Wilson was adjudged to have pushed Sanchez before chesting and firing home – borderline one in my mind.

Eddie`s final throw of the dice was to bring on Defoe for Stan and create a Wilson/King/Ibe/Defoe front line that really defines s*** or bust against a team of Tottenham`s counter-attacking prowess. The game fell apart from that moment really – a tired midfield two disintegrating after both had had good games and everyone else up pitch with their arm in the air. Cook was at fault for a very naïve third. Franno giving him the ball when he didn`t need it from a short free-kick with all the other defenders in the box. He went on a dribble when he should have just hoofed it, got hunted down, and SON was allowed to break at speed for a ‘school goal` running from inside his half unopposed to trick Begovic and score.

Worse was to follow when Begovic parried Lamellas cross and AURIEL followed up to head home and dent the goal difference.

Begovic 4 – Seems shot of confidence with fumbles and judgement.

Mousset 6 – Barnstorming start but then tired and options diminished.
Wilson 6 – Willing and strong running of channels.

MOM – Toss-up between Franno and Gosling today for me. I will give it to the skipper for bouncing back so well from a form dip, He was the Franno we know and love today.

Verdict
A very strong first 70 odd minutes against top class opposition. That part will have delighted Eddie. The team employed two high presses at the start of each half and that would be a great tactic for lesser teams. I won`t have been the only one thinking – ‘why didn`t they start like this against Newcastle`. It is only an out of form keeper and some naïve decision making that didn`t see us throwing the sink at Spurs in the last few minutes. The latter will be fixed but I can`t imagine the former will as I can`t see Boruc running out against the Baggies next week – shame – if Eddie is consistent about dropping out of form players he should.

The good points are if we can play like this for the rest of the season we will stay up with ease. Mousset also looks like he will become a good threat in time. There was a solid game plan of press/relax and sit deeper/press that Spurs couldn`t live with at times.

On a negative front – why have we abandoned the 3-4-3 that helped us to compete with top teams a month or so back, our midfield could have done with that support today and our forwards would have had more natural width. We also have to consider what role we want for Defoe?..our best spell came when we weren`t practising roles for him in Premier League games and he was non-existent in his cameo today despite so many runs. Also – what do we coach keepers? The pattern is alarming.

So, no disgrace today in a warm up for a crucial game next week. If we apply ourselves the same way only bad-luck or a referee error could deny us. Today, to me, was a game that offered more hope than worry?. We just need to cut out individual errors of judgement. Back to real football next Saturday??.see you then!