AFC Bournemouth travelled to Huddersfield Town on Tuesday night knowing that a fifth consecutive victory would propel the Cherries into fifth place in the Championship table, ahead of Barnsley and Reading, who they were chasing down just a few short days ago.

Junior Stanislas returned to the squad after illness, but only found himself with a place on the bench after David Brooks’ recent return to both fitness and form.

Philip Billing and Dominic Solanke continued their recent goal scoring form, with both on the scoresheet again to secure the three points.

“It was pretty comfortable until they scored with 15 to go.. The Championship is a tough league of course, and you can’t afford to let opposition teams off the hook. We deserved to win today, no question. We need to be more clinical in putting games to bed, though.

“We were well on top at half-time, but games like this can come back to bite you if you’re not careful. We’re back in a good position now.”

Man of the match against Huddersfield? 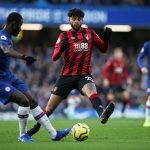 Big 3 points 💪🏽 That one felt good. Nice to add another goal also 😁 pic.twitter.com/kUtK5yHyPU

"We're going to make sure it doesn't happen against us"@BillingPhilip says Bournemouth are determined to delay Norwich's promotion part on Saturday 🔊👇 #afcb 🍒 pic.twitter.com/skwAeL64Iz

Billing my man of the match. So much energy today, he was all over the pitch and always involved. A near-perfect performance from the big Dane.
Could it be that Jonathan Woodgate is giving him the love he needs to produce his best? His whole attitude seems different.

Nice to see the players enjoying themselves today. I didn’t see any frustrations coming out or pouting, they just went out there and played as a team and for the result. They played with confidence too, as if for them the result was never in doubt ( as they should ! ).

A bit nervy at the end but we passed that test too, so credit is due.

I think we have a TEAM once again and I find myself always looking forward to seeing how we’ll do in the next game.

Whisper it, but it looks like promotion could be a genuine possibility now.

When you look back to the table after our defeat against Barnsley at home after 36 games, we were in 7th place 13 points behind Swansea and 10 behind Brentford. Plus 5 points behind both Barnsley and Reading.

Then tonight’s table, it certainly is a great recovery and credit must go to JW. – Join the conversation, click here.