Goalkeeper conundrum at Bournemouth – How does it get resolved? 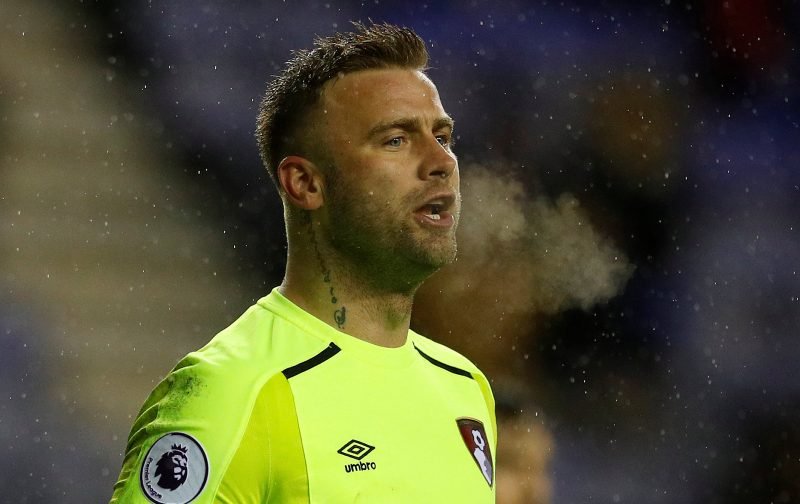 With former Poland international goalkeeper Artur Boruc turning 40 next season, it had been widely assumed that at the end of his contract, Boruc would leave Dean Court and AFC Bournemouth.

But that was until Asmir Begovic’s serious drop in form.

During the summer of 2017, AFC Bournemouth purchased Begovic from Chelsea for a fee reported to be in the region of £10million.

Begovic was seen as the long term option between the sticks and last season played every Premier League game for the Cherries, with Boruc limited to just 6 appearances in the Football League Cup and the FA Cup.

But at the turn of the year, things changed, Begovic had put in a number of below-par performances and AFC Bournemouth manager Eddie Howe opted for a change, reintroducing Boruc to the first team fold in the league for the first time since May 2017.

Begovic appeared to not respond too well to being dropped and when he was given a lifeline, a somewhat undeserved chance considering Boruc had been the Premier League goalkeeper of the month for March, he squandered it.

Begovic was handed a start for the game against Burnley in April, but the Bosnian made a number of blunders.

Statistics website whoscored.com gave him a score of 3.84 for that game. It is now looking increasingly likely that this will be his last appearance for AFC Bournemouth, having been given an extended leave of absence towards the end of the season in favour of then 19-year-old youth team goalkeeper Mark Travers.

It would seem unlikely that AFC Bournemouth can push forward with young talents such as Travers and Aaron Ramsdale who impressed AFC Wimbledon supporters during his loan move, so what next for AFC Bournemouth.

First things first, a new one year contract with Artur Boruc has now been agreed and sealed.

???? When your contract is up but there's a new one-year deal on the table…

39-year-old #afcb goalkeeper @ArturBoruc has committed to another season at the Vitality Stadium pic.twitter.com/EEj4fwNlVH

But just how does the situation get resolved? Will AFC Bournemouth manager Eddie Howe sign a new goalkeeper?

The media speculation suggests he will, with Jack Butland, currently involved in the England squad for the UEFA Nations League finals the favourite.

Burnley goalkeeper Nick Pope has recently signed a new contract with his current club and Liverpool goalkeeper Simon Mignolet doesn’t wet the appetite of many.

Former AFC Bournemouth goalkeeper Shwan Jalal believes that none of the media favourites are likely to fit the bill for his former boss Eddie Howe and he tips a signing from Europe to make the move to Dean Court.

????️ "I think the club is going to want somebody who is comfortable with their feet."

Former #afcb number one @JalalGK speaks to @jordanclarkcouk about the goalkeeping situation at the Vitality Stadium… pic.twitter.com/4Bvwr2H5gm

Could that open the door for Artur Boruc’s Poland team-mate Bartlomiej Dragowski?

The 21-year-old Fiorentina goalkeeper had been heavily linked with a move to South coast neighbours Southampton with a reported fee of €10 million made over the weekend.

However further reports attributed to Italian website alfredopedulla.com claim that AFC Bournemouth have now guzumped Southampton with a €11 million bid plus bonuses.

According to google translate the report claimed…

“For the time being Fiorentina has not made a decision, it wants to wait for the evolution of corporate events, even more so after yesterday’s press release. Meanwhile, Bournemouth’s proposal for Dragowski has exceeded that of Southampton“

Could he be the answer for next season and beyond?

He’s a great shot-stopper, but remains to be seen whether he would be good enough in the air to play in England. – Join the conversation, click here.