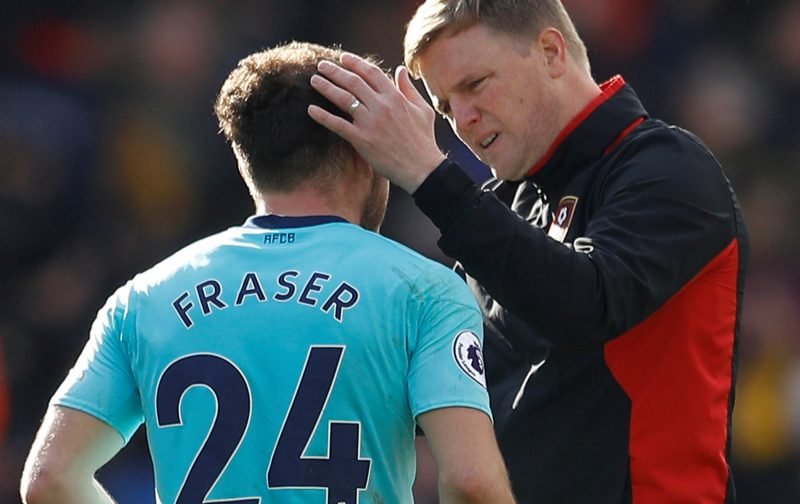 Following the victory over Tottenham Hotspur at the weekend, a jubilant AFC Bournemouth manager Eddie Howe declared his confidence that he could keep the current Cherries squad together during a very important summer transfer window on the south coast.

Despite reports that Fraser is off, Howe is confident he can keep squad together in his biggest summer to-date

Overall he wasn’t discussing any player in particular and whilst there has been transfer speculation surrounding many of the current AFC Bournemouth squad, the main subject of speculation has been in regards to Scotland international Ryan Fraser.

Fraser’s current contract with AFC Bournemouth expires at the end of the 2019/20 Premier League campaign.

As Fraser would then be able to leave Dean Court on a free transfer, a common practice in this scenario is that usually the player is sold, so that the club does not lose a player for nothing and can cash in.

Fraser has been heavily linked with a potential summer move to Arsenal.

However, it would seem that there is somewhat of an impasse between Fraser and AFC Bournemouth with both parties suggesting that they are happy to let the next 12 months tick by without any resolution.

“There’s a very good chance I’ll be here next season.

“If that’s that then I’m going to try my best as I always do and I’ll enjoy it.

“I love the group here and the fans. There’s no bad side to what’s happening.

“There’s a good chance I’ll be here next season and I’ll try and beat my assists record next season as well.”

“We would sign Ryan to a new contract tomorrow but that’s obviously a two-way process, The only thing I can say is he’s under contract next season.

“I have no intention of breaking this team up, that’s my wish…

Regardless of how good he is, and that we may have to let him walk for nothing, we should ‘not’ bust our pay structure to keep him… If the several contracts we’ve offered him now top out our max budget, and he still won’t sign then sorry, we should let him go…

I’d love to have Fraser on a long-term contract, as I think we will really miss him… but if we start offering players what they want, as opposed to what we can afford (which has to be still at around £70k per week), then it’s a slippery slope… – Join the conversation, click here.