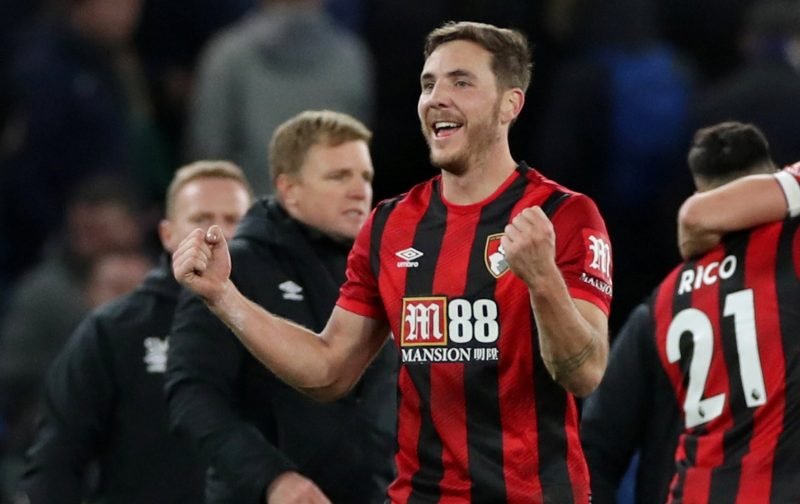 Is it me or is it far more enjoyable watching football again? Goals not chalked off every few moments, penalties not given out like sweets and goal alerts not reversed when you can’t watch the game!! It’s fun to watch the Cherries again!

I must say it was a blow before kick-off to realise that Arnie Danjuma was ruled out (I do hope he’s not going to be another Stanislas when it comes to injuries). However, any lingering doubts were misplaced as the Cherries started the game at breakneck speed. Solanke should have done better when clean through but somehow managed to backheel it out of play. A few minutes later though some lovely link-up play saw Gosling backheel the ball to Dom who calmly rolled the ball to a newly rejuvenated Lerma who blasted it in!! 1-0.

Cherries were controlling proceedings and perhaps should have gone 2-0 up when an almighty goalmouth scramble resulted in at least 2/3 clearances off the line. It might have been my VAR adjusted eyes but was there a handball in there? Hamer then stung the palms of Begovic before a miraculous goal-line clearance prevented Dom from making it two. We were comfortable but were warned when O’Hare hit the post and minutes later the Sky Blues had won a penalty. No complaints from me as a mistimed Lewis Cook foul resulted in spot-kick success for Godden. Cherries continued to press before the break but to no avail.

JT had an important team talk at the break but I was delighted to see us come out of the traps quickly in the second half. Some lovely interplay saw Stacey released down the right. He squared it to Gosling who inexplicably smashed it over when it looked easier to score (I’ll let him off for later but Surridge was also free to his left). Dan made amends minutes later as once again Stacey was played in. This time Solanke miscued his shot but luckily it fell into the path of Dan Gosling who slotted it home! 2-1 and fully deserved!

The Cherries continued to press with Sam Surridge, in particular, having a good header saved by the Coventry shot-stopper. Dan Gosling then turned into Frank Lampard as a good bit of skill by Rico and half-hearted tackling by Hamer saw Dan move onto the edge of the box. It was great to see the net bulge as his excellent 25-yard shot gave the Cherries breathing space.

Sam Surridge was again denied a league goal before the contest was effectively null and voided by some silly play by Hamer. It was a bad challenge by Smith, deserving of a yellow card. Hamer and Steve Cook then appeared to be in a scuffle. At first glance, the red card to Hamer seemed harsh but with a second look, I am convinced Hamer spat at Cookie. If this is the case the book should be waved at him! Despite the man advantage JT and the boys were content to shut up shop and three points were secured.

Begovic – 6 – Didn’t have much to do and had no chance with the penalty. Let’s get behind the big Bosnian as he looks like being our No1 this year.

Stacey – 8 – Jack seems to be getting better and better and has a real engine on him. It’s a shame both him and Smith prefer playing there!

Smith – 7 – Another important player for us. Still prefer seeing him on the right but that debate is for another day.

Mepham – 7 – Once fully fit I think the big Welshman will be an integral part of the team. Slowly working his way back to fitness.

S Cook – 8 – Solid at the back. We will need to hold onto him over the next few weeks as our Captain is a big player for us.

Rico – 7 – Didn’t have much to do but I like the Spaniard in this new position. Vamos Diego!

L Cook – 7 – I know he divides opinion on here and he had one of those games where he did blow hot and cold. Gave the ball away a bit too often for my liking but also tidied up a great deal of woeful Coventry passing.

Gosling – 8 – Another player who divides opinion. Seemed to see less of the ball than his midfield counterparts but popped up with two excellent goals and an assist!

Lerma – 9 – Back to his best for me for our Colombian giant! I love seeing him in a more advanced position and he always looks so assured on the ball. Best game I’ve seen him play this calendar year.

Solanke – 7 – Talk about dividing opinion, we then have Dom! Lots of potential but you’d just like the ball to stick more. Worked hard for the team though and was unlucky not to score.

Surridge – 7 – A bit of an unlucky game for the young lad as he was denied 2/3 potential goals. Great to see Sam play though.

Man of the Match – Big Jeff for me! Back to his imperious best but great to see him playing higher up the field.

Final thoughts – We have our excitement back! Yes, the Premier League was exciting and yes that’s where we want to get back to but this is the football I love to see week in week out. It’s competitive from match 1-46 and you’re always kept on your toes! I love the high press we have introduced and the change in formation seems to have worked well so far. Let’s see who we can hold onto now. Keep Brooks and Arnie fit, add a bit of Roro Spanish flair and get Dom scoring and we could be in business. Strap in Ladies and Gents as it could be one of those seasons and I for one love it!!

Thought it was a fair report, although Coventry are not the best team we will play in this division. So far so good for JT. Noticed how many goals we have scored from outside the box already. Last season there was a fear/reluctance to shoot and try to pass it into the net instead.
With Brooks & Danjuma to come back, we’re a fairly strong team, but I’d like to see Kelly in for Mepham & Dom on the bench to give Surridge a chance (more natural goalscorer in my opinion).
Definitely need a couple more signings, but in the meantime DO NOT let King near the pitch or bench! He may be turning into a Norwegian version of Wee McTurd, so sooner sold the better! – Join the conversation, click here.