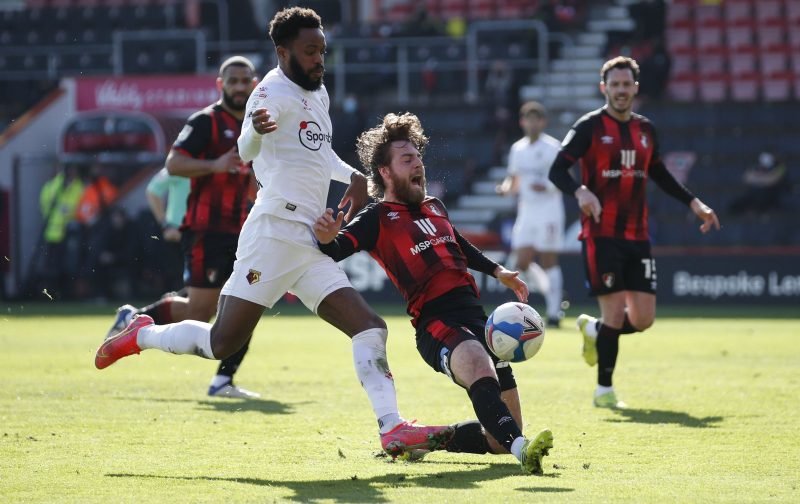 AFC Bournemouth hosted Brentford at Dean Court on Monday night in the opening match of the Football League play-off games.

The Cherries, along with Brentford, Swansea City and Barnsley are all vying for a place at Wembley to be part of the Football League showcase match, the Championship play-off final where the winner is promoted to the Premier League.

The semi-final games are often tight and cagy affairs in the first-leg, whilst the second-legs are often more open and filled with drama.

The Cherries take a slender 1-0 lead into the second-leg thanks to another goal from wide attacker Arnaut Danjuma.

However, it wasn’t all good news for AFC Bournemouth as they suffered a double injury blow, losing AFC Bournemouth captain Steve Cook to a knee injury and Cherries midfielder Ben Pearson to a hip complaint.

The duo have been key figures in the clubs push for promotion and according to BBC Radio Solent’s Kris Temple, both are set to have scans on their injuries to ascertain the extent of the problems.

Will they be available for the second-leg against Brentford on Saturday or any potential Championship play-off final a week later? It’s a nervous, wait and see period for the Dean Court faithful.

#AFCB pair Steve Cook (knee) & Ben Pearson (hip) will both have scans to ascertain the extent of their injuries pic.twitter.com/kvllClAqx2

Devastated to be injured. Good to see the boys see the first leg through though. Far from finished but looking forward to Saturday 🍒🍒 pic.twitter.com/mYV2VWJKb1

🍒 Big leg brace for Steve Cook post-match last night after hurting his knee. Will now undergo a scan to see if he has any chance at all of recovering in time for Saturday. Did make it around the pitch to thank the fans though, which is promising. #afcb pic.twitter.com/nNsmQpIMgY

“He was playing well to be honest with you and it was a blow to lose Cookie.

“It’s a knee injury but I don’t know the whole prognosis. He’s got a chance.”

It’s funny as I’m sure I wasn’t the only one concerned when Cook went off and Mepham came on (I like Mepham but he’s no Cook), Pearson went off for Stacey (whatever that formation was it really didn’t work), and then Wilshire coming on for Brooks… Yes we are thin squad-wise, but all 3 did really well…