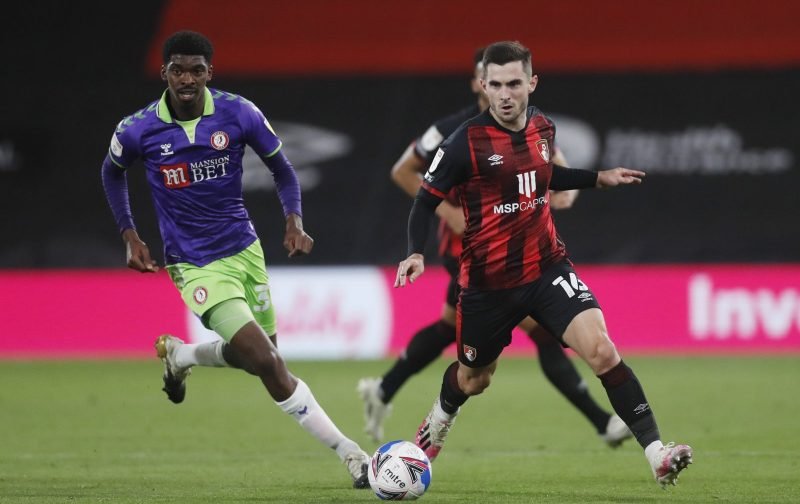 AFC Bournemouth have suffered a number of injury blows ahead of their final run-in to reach the Championship play-offs and FA Cup quarter-final against Southampton.

23-year-old Wales international David Brooks has been out of action for over a month after he rolled his ankle in training in February. Thankfully this was the opposite ankle to the one that had required two operations last season, which had kept him sidelined for 11 months.

It is hoped that he could be closing in on a return, which could prove crucial for AFC Bournemouth manager Jonathan Woodgate as he has suffered four other injuries to first-team players.

The worst unfortunately is for Lewis Cook.

The World Cup-winning England Under-20’s captain has suffered another ruptured anterior cruciate ligament in his right knee. The 24-year-old suffered the same injury in December 2018 and didn’t feature again until September 2019.

Cook reportedly had an operation to repair the knee yesterday (16th March) and Woodgate backs Cook to come back stronger than before.

“We’re obviously gutted for him as a team that he’s going through this now, but he’ll come out of it fitter, stronger and faster than he was before.

The next blows came during the Barnsley game at the weekend and in training ahead of the midweek clash with Swansea City. This saw Woodgate lose both first-choice full-backs in the form of Adam Smith and Lloyd Kelly.

Smith has suffered an ankle injury which will keep him unavailable until at least 2nd April for the game against Middlesbrough, whilst Kelly has been ruled out of at least the FA Cup quarter-final clash with south coast neighbours Southampton with an Adductor strain.

“We’ve got two really good right-backs at the club, When Jack (Stacey) played against Burnley in my second game in charge I thought he was very, very good. So we’re lucky to have that.

“Obviously gutted Smudger’s not available, but now it’s an opportunity for Jack to come in and play.”

Just when Woodgate thought it couldn’t get much worse, just half an hour into the game against Swansea City he lost the sides (then), top goal creator, this season in Junior Stanislas.

The 31-year-old has scored 10 goals and claimed 4 assists this season, which is the best goalscoring form of his career. His 29 appearances spanning 2,155 minutes, is also a career-high.

But for a player that has been plagued by injuries, he’s been hit with another, having to come off with a hamstring pull. It’s yet to be confirmed how long Stanislas will be unavailable for, but Woodgate told the Daily Echo that he, like Kelly, would not be available for Saturday’s FA Cup tie with Southampton.

we are starting to look really thin with the injuries now…