Bournemouth missed Callum Wilson, will he be out for long? 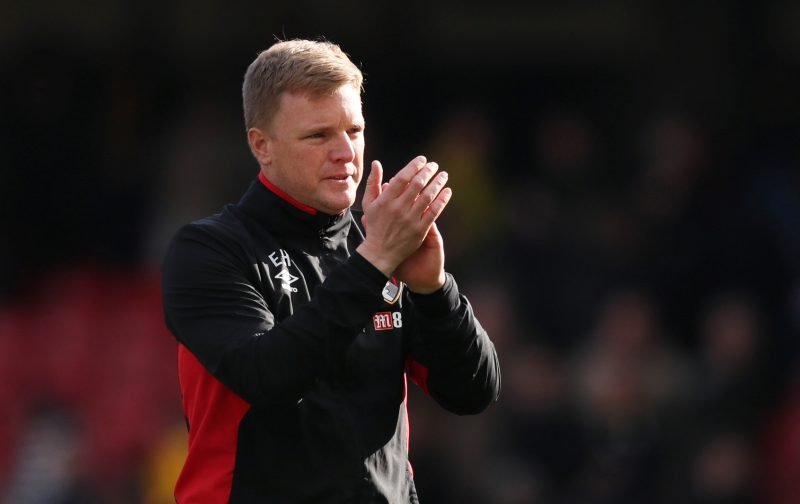 AFC Bournemouth suffered a double injury blow ahead of the visit of Liverpool.

England Under 21 midfielder Lewis Cook has been ruled out for between six to nine months for an ACL injury, whilst striker Callum Wilson was missing with a hamstring complaint.

The Cherries would go on to lose 4-0, with the major talking point being the opening goal that was given despite Mo Salah being offside.

Going in half-time with a 0-1 score and a question of offside that was not given, we had a chance.

That second goal shortly after half-time probably killed the game for us.

Not sure Liverpool really had to get into top gear.

This team don’t give you many chances and you have to take the ones you get.

Wish we could get consistency from the referee, booked our players but should have shown a yellow earlier in the first half to them.

East stand lino had a shocker of a first half.

“It was a difficult match and a tough score-line to take. The first goal had a massive bearing on the game because I thought our shape had been good and Liverpool hadn’t opened us up at that point. The first goal shouldn’t have stood.

“We got ourselves back in the game and I felt it was well setup at half-time for us but we started to make some individual mistakes that really hurt us. At the end of the first period we had showed more of what we’re capable of. The second goal seemed to knock the stuffing out of us a little bit and the game became more difficult then…”

“…We missed Callum today. He brings us that unique mix of physicality and pace which I think would have troubled Liverpool’s back-line more than we did today. That’s no criticism of the lads who did play.

We re-shuffled and felt we might get more of the ball in dangerous areas but that didn’t really materialise. I don’t think his injury is going to be long-term. He’s got a grade one hamstring injury, so we’ll try to get him fit for Wolves.

In all fairness, this game was lost before the kickoff. This is what happens when you play a top-six side with key players missing i.e. Adam Smith, Dan Gosling, Lewis Cook and then Callum Wilson.

Although there is no disgrace in defeat to Liverpool. This game was only going to go one way and went as I predicted. We would not have scored should we have still been playing at this time tomorrow and we did not even look like scoring.

What I am concerned about there is a high likelihood that will not get anything at Wolves either. They are at home and will be on a high after getting a result against Chelsea. AFCB will be going there with key players missing. This does not bode very well for us. After the Wolves game, we have to play two more top six sides from which, in all fairness, get nothing from.

This why I stated earlier that we are reliant on the bottom three dropping points in order for us to maintain a healthy points gap between us and them. We have done well overall this season but we are in a middle of a clump of fixtures against the top six sides of which our record against them this season has attracted 0 points. Along with a long injury list.

This is why I maintain my view that we must take points off of the lower order sides to survive. These are must-win games from our perspective. If we are not careful we will be too close to the bottom three by the middle of January for comfort. – Join the conversation, click here.