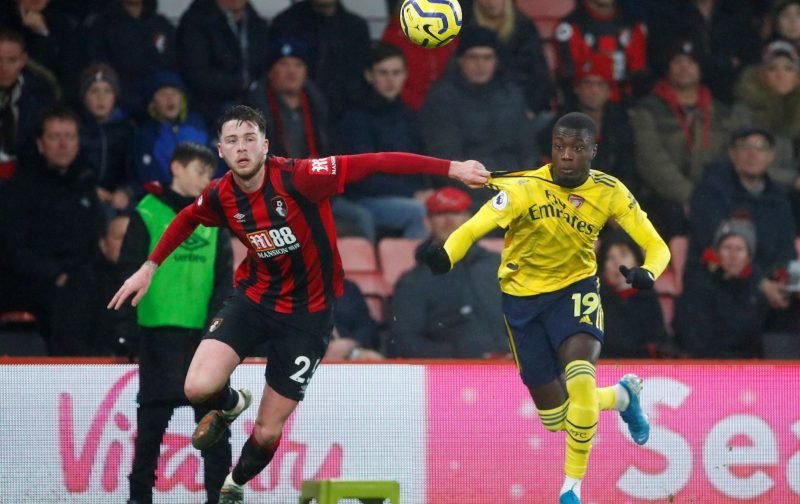 Due to media speculation, a defender leaving AFC Bournemouth during this January transfer window doesn’t come as a surprise, rumours surrounding Nathan Ake’s potential move to Chelsea, however, appear to have quietened down in recent weeks.

In fact, some reports have suggested that Chelsea manager Frank Lampard has begun to look in another direction for defensive reinforcements, which leaves Arsenal as potential suitors for the Netherlands international.

But if they don’t make an approach and Ake remains for the second half of the 2019/20 Premier League campaign, one other centre back could depart Dean Court.

Championship side Stoke City have been heavily linked with a potential loan move for Jack Simpson, whilst Middlesbrough and Derby County have also been mentioned as having more than a passing interest in the 23-year-old.

Seen on the south coast as one of the youngsters, having come through the AFC Bournemouth youth system, Simpson is now approaching his mid-twenties and has very little to show for his career thus far.

He made his debut in the League Cup against Middlesbrough in October 2017 and just two months later he made his Premier League debut against Manchester City playing 72 minutes.

Simpson, however, has only gone on to tally up 642 total minutes in the top flight of English football, which is the equivalent of just 7 games.

AFC Bournemouth manager Eddie Howe has confessed that at this stage of his career Simpson needs regular football and if the opportunity arises and if the Cherries have the cover in defence to afford it, a loan move for Simpson could be on the cards.

“He is a player of huge potential and promise but is coming to an age where he probably feels he needs regular football. It’s obviously got to be right for us and for him.

“He’s got that rare composure on the ball. I remember one of the early performances he gave at Chelsea, as good a performance I’ve seen with the ball from a centre-half in a long, long time.

“He’s got that ability to find passes under pressure. He seems to rise to the occasion, which is a great quality to have mentally.

“Physically he’s good. He is six foot three, he can head the ball and is athletic. He does have everything – the only thing missing for Jack is the experience that a lot of the other players have.

“I back him to get there whether that’s with us, in terms in getting in our team, or maybe looking out on loan.”

Due to injuries to other players, he’s sat on the bench when he could and probably should have been out on loan. He’s never going to improve if he doesn’t get game time and now Lloyd Kelly’s fit, at last, I think he should be allowed to go out on loan. Realistically, Eddie Howe is never going to give him more than 3 or 4 games before the end of this season anyway. – Join the conversation, click here.