An entertaining if low on quality draw for Bournemouth at Watford 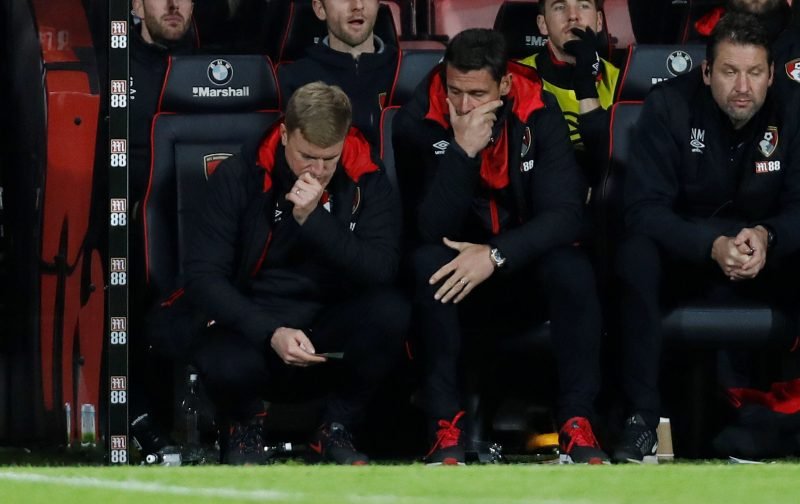 The Cherries & Hornets served up an entertaining if low on quality draw in the foul Hertfordshire weather.

Eddie made three changes from the bore draw with Norwich a week earlier with Lewis Cook, Solanke & Harry Wilson missing out and Jefferson Lerma, Joshua King & Arnaut Danjuma coming in, the latter to make his first PL start. The team lined up in a familiar 442 formation which baffled some, Watford deciding to pack 5 in the midfield similarly to many of our lower placed league rivals.

Watford started the brightest and Cherries seemed to be still half asleep when after a couple of minutes the always dangerous Deulofeu shot at Ramsdale who palmed it away only for Doucoure to blast over when it seemed easier to score.

Watford had nearly all of the first 15 minutes under their control. However, a substitution due to an injury to Cleverly, replaced by Will Hughes, interrupted Watford’s flow and Bournemouth sprung into life when following a corner Captain Cook outjumped the Watford defence to glance a header against the crossbar. This seemed to spark us into action and we dominated right up until half time when the game should have been over.

Corners and set pieces followed but a MOM performance from Ben Foster would ultimately see us fail to take advantage of our first-half possession. The final pass on so many times was just missing, Danjuma cleverly making his way into the box past two defenders but not finding Wilson when unmarked was a golden opportunity missed.

Rico was having another positive game and following another corner, he lashed a volley at the Watford goal which Foster flew across his goal to keep out.

Dawson was then booked along with another 4 Watford players in the game, nearly all for cynical fouls, although our players could do with cutting out the old theatrics once again!

Then came then the best chance of the match to win it from a superb move just before half-time. King got away down the right and slipped a magnificent pass straight across the 6-yard box to find Danjuma who side-footed it towards goal only for Foster to deny him with the save of the match.

Second half and I’m afraid to report we just did not come out the same side. It took us another 25 minutes to get into the game. We constantly gave the ball away and gave Watford the confidence to look for a goal. Luckily, you could see from their final ball and shots why they are bottom of the league.
The weather didn’t help, of course, it was torrential rain for the second half. But some of our player’s decision making left a lot to be desired.

Harry Wilson was then introduced for the tiring Danjuma. He certainly made more of an impact as a sub than in previous weeks and looked to penetrate the Watford defence.

With 15 minutes to go Solanke replaced a completely isolated and ineffective Callum Wilson who was starved of any service but also didn’t look anywhere near as sharp as we know he can be.

Solanke’s first contribution was to give the ball away as Watford failed to take advantage.
Ramsdale was called into his first and only real save of the day as he tipped an effort around the post with the minutes ticking away.
Bournemouth rallied in the last ten minutes and we did look dangerous with Harry, Solanke and King bearing down on goal but the final ball was just not there.

Harry was presented with our best chance of the half with 4 minutes to go but his excellent free-kick flew inches past Fosters’s goal with the ex-England stopper rooted to the spot.

Fraser had a late chance but Foster was again equal to it.

Mike Dean managed to equal his 8 yellow cards from the previous week and blew the whistle to end an entertaining game that Watford will surely be more happy with the point than us.

Ramsdale 8 – Didn’t put a foot wrong and when called upon made a fantastic save near the end. Solid and gives the team total confidence

Rico 7 – The odd slip but growing in confidence and dangerous when joining the attack.
Ake 7 – Quiet and didn’t have to notice him too much which means he was doing his job well as always.
Cook 8 – The pick of the back four for me, marshalled the team well and should have scored.
Smith 7 – Another energetic performance, good to have him back. Tries to make things happen.

Danjuma 6 -Decent debut although should have capped it with a goal.
Lerma 8 – How much do we miss him?
Biling 8 – Tried to get things moving and in the absence of Lewis Cook or Brooks, trying to be the creative spark.
Fraser 6 – A better showing than last week but not quite at the races yet.

C.Wilson 5 – One of his poorer performances, not involved anywhere near enough.
King 6 – Dangerous at times but also drifted in and out of the game.

Subs – H. Wilson 7 – Came on and made a difference, good free-kick almost gave him the headlines.
Solanke 6 – Tried to get involved.

MOM – Ramsdale for me. Not one mistake and made a great save to keep the Hornets out.

Verdict – This was ultimately 2 points dropped even though a point away in the PL is great. We had the better chances of the two teams to win it and bossed the possession with Watford happy to sit back and let us try and break them down, something we struggle to do. Especially with 2 midfielders, who both played their hearts out but Once again I can’t help thinking Eddie missed a trick here like last week by not playing 3 in mid. Lewis Cook surely would have created something of quality where no one else really did.
I’m also not a fan of the slow laborious way we turn the ball over, we need to move it a lot quicker and too much messing around at the back could cost us soon. Having a third midfielder could alleviate this problem.
We’ve tightened up the goals against which is great but the strikers are not getting the chances we used to create of late.
Lots of positives though, I thought this a lot better performance than last week v Norwich.
If we can get the ball moving faster and find our ruthless streak upfront we could be turning these teams over. A point is still a point, especially away from home and we are 8th in the league.

I just didn’t want to be the first team to lose to that lot! Someone else can have that award, unless it comes on January 12th!!!!